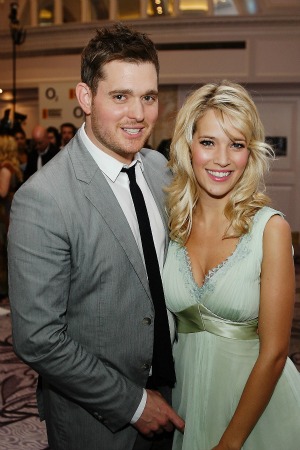 The singer shared, “We are so excited. We have just come from the hospital, and the sonogram was pretty clear, it’s a boy! We are thrilled.”

It was an interesting day for the Argentine-born model who went to the doctor with her husband after the Vatican revealed the new pope was from her country.

The Grammy-winning singer told the Post, “She said, ‘It is a sign!’ But there’s no way we are going to call him Frank, even if it did work well for Frank Sinatra.”

The bundle of joy is due in August and he’ll be the first child for the couple. The duo met in 2008 at an industry party in Buenos Aires. The couple became engaged in November 2009 after he proposed in front of her family, and were married in March 2011.

Bublé and his wife have shared much of their relationship with their fans. The 37-year-old’s hit “Haven’t Met You Yet” was written for Lopilato and she even appears in the music video. The couple also shared their baby news on the actress’ official YouTube page in January.