The singer shows up late for live taping of American Idol and blames her tardiness on traffic while her co-hosts fume. 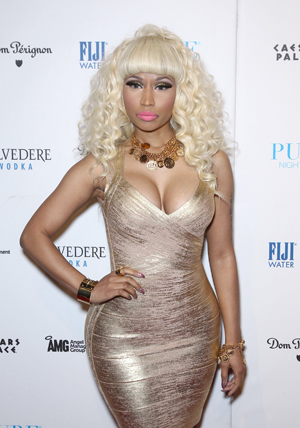 Everybody kept smiling under pressure on Wednesday night’s American Idol live taping, but you could tell they were massively annoyed at Nicki Minaj for being 13 minutes late.

“We are coming to you live an on time,” host Ryan Seacrest said pointedly at the beginning of the show as the audience clapped wildly. “Keep that energy going for three of your four judges that have made it here tonight.”

Seacrest then came to sit down in Minaj’s prominently empty seat between Keith Urban and Randy Jackson. “This is for Nicki,” he said, looking put out. “I hear she’s seven minutes out, there’s some congestion on the 405” [a freeway in Los Angeles] “she should be here momentarily.”

“I thought it was the 101,” quips Randy Jackson while Mariah Carey gritted her teeth beside him.

A few minutes later, Minaj appeared, wearing a dressed-down black hoodie and sunglasses instead of her usual glam getup. She missed the first contestant, Curtis Finch, Jr., singing onstage, but he told E! News that she showed up backstage as he was coming off: “It was literally like, step, step, step, curtain, Nicki, and she was like, ‘Good job today.’ To see her backstage was comforting.”

Minaj did deliver one of her trademark odd speeches to Kree Harrison, one of the top ten finalists of this season, saying that Kree’s performance made her feel like having waffles. Or maybe that’s what she was saying? You be the judge.

“Sometimes when I wake up every day, I like, sometimes if I’m not working, I’ll eat like waffles, like buttermilk waffles and I’ll have to have like Aunt Jemima buttermilk syrup on it, and it’s like I’ll toast it, I never burn it, I’ll put it in the microwave and warm it up a little bit and that’s what that performance felt like to me,” Minaj blathered, while fellow judge Keith Urban picked up her drink and sniffed it conspicuously, obviously sniffing for booze.

Later, Seacrest asked Minaj what was in her cup.