Keith Olbermann filed a very prickly lawsuit against Current TV for $50 million last year and it looks like the two have settled. Olbermann remains unemployed. 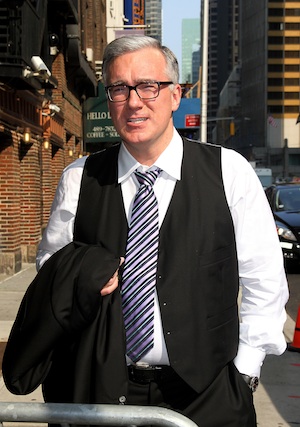 Keith Olbermann settled his lawsuit with Current TV this week.

The final settlement amount was not disclosed — Olbermann originally sued for $50 million, citing illegal equity and compensation losses from his termination from the network.

Keith Olbermann worked for Current TV for about a year, from February 2011 to March 2012.

Olbermann and Current TV’s relationship seemed strained at best throughout his time at the progressive news channel. Keith’s lawsuit alleged network executives unethically lured him from MSNBC with “promises of complete editorial control, freedom of cooperate influence, and the professional support to produce a high-caliber political commentary…” only to discover Current TV wasn’t much different than MSNBC.

While MSNBC had complained of Olbermann making partisan views on-air in the past, in 2008 the network renewed Keith’s contract for four years for $30 million. It was not renewed in 2012 and MSNBC declined to provide specifics on the issue.

For example, Olbermann alleged he was promised a show on a “legitimate network and instead got an unprofessional cable-access show” and that Current TV’s co-founder, Joel Hyatt, “attempted to isolate Olbermann from his professional representatives in an awkward attempt to form a close personal friendship.” (For regular people, it’s otherwise known as your boss wanting to be friends with you and you just have to deal with it.)

Current TV said Keith once threw a coffee mug which subsequently broke and caused a “potentially dangerous environment,” and that Keith also spent $50,000 on “eight different car service companies” because Olbermann had trouble finding one that met his standards.

Keith Olbermann is still unemployed and is rumored to be looking at ESPN for his next job. While the New York Times reported Olbermann and ESPN president John Skipper had dinner recently, Skipper has refuted any speculation there’s a role for Olbermann at the network.