She hosts Vh1’s Big Morning Buzz Live with Carrie Keagan and we got to hang with her on set, where the host dished all about her awesome job and favorite celebrity interviews 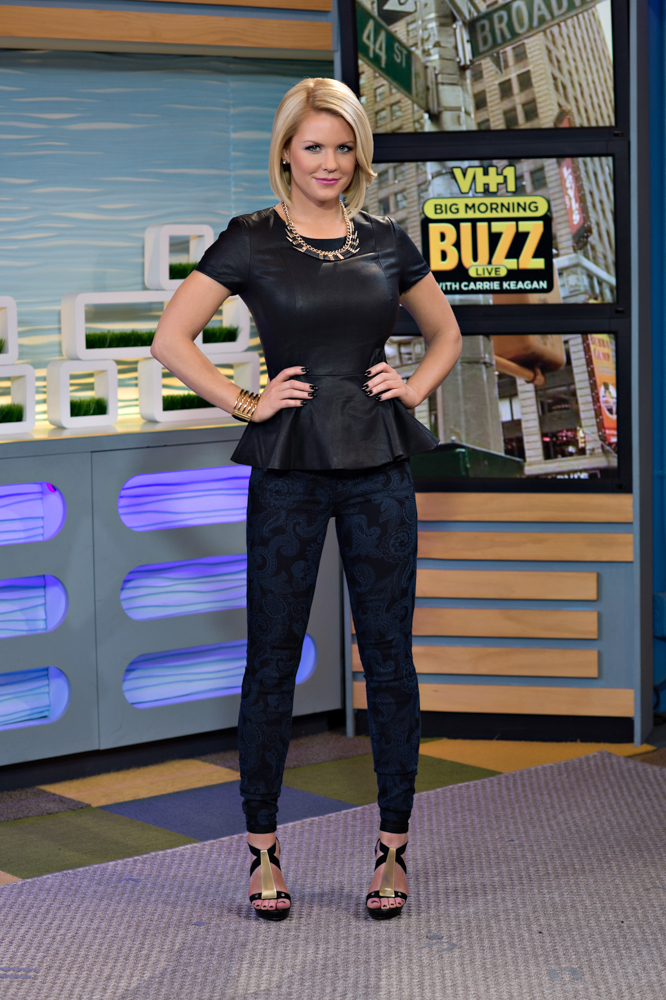 SheKnows: Your show is live every day. What’s the craziest or funniest thing that’s ever happened to you on-air?

Carrie Keagan: I love that we’re live, and anytime a guest decides to embrace the chaos of possibilities, it’s great. The time Greg Grunberg crashed Nick Cannon’s interview and turned the whole thing into a circus was incredible. The expression on Nick Cannon’s face was priceless. Jerry Springer tearing his shirt off and doing the interview topless was amazingly ridiculous, the on-air cream pie fight that got out of control… we love messing around, so if there’s an opening, we take it! On the a more serious note, Buzz has become a breaking ground for artists on the rise. We were the first U.S. show to have Psy on doing the “Gangnam Style” dance, which was insane. We were one of the first national talk shows to present Macklemore and Ryan Lewis.

SK: You’re on set every day at 5:30 a.m. What are your tips for having energy so early every morning?

CK: It’s really the perfect combination of two things. First, you’ve got to get enough sleep. You’ve got to have the discipline to get yourself to bed by 8 p.m. None of this party-all-night-then-power-nap bulls***. Believe me, I try that every once in a while — it doesn’t work. Second, surround yourself with people that inspire you and make you laugh. I’m incredibly lucky to be working with such a great group of people on Buzz. I mean, the funny starts when everyone starts rolling in at the a**-crack of dawn and continues throughout the day. My Buzz squad is the Energizer battery in this bunny!

SK: What celebrity guest are you dying to have on Big Morning Buzz?

CK: Emma Stone is my girl! She’s wonderful. We have a long history together and every time we see each other it’s just silly, girlie and stupid fun. Emma, I’m keepin’ a seat warm for you!

CK: Jason Momoa came on the Buzz a few weeks ago. Not only is he a handsome man, but he’s a cool guy, a great dad and a devoted husband — every girl’s dream. Even the straight guys on set were swooning over him!

SK: What do you like to do in your downtime?

CK: I don’t have a lot of downtime, but when I do, I love traveling. I want to see as much of this planet as possible. Right now, I’m in the process of slowly slumming my way through all of the Caribbean islands. Someday I’d like to open a bar on an island on the edge of the world.