Nasty goons reportedly steal $100,000 worth of jewelry from Julianne Hough’s car. The gems were a gift from boyfriend Ryan Seacrest. 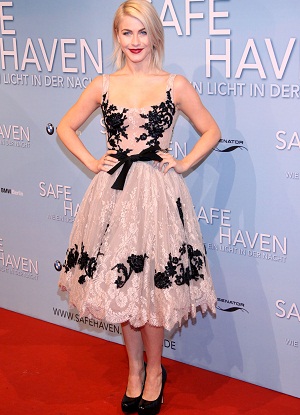 On Friday night, thieves broke into Julianne Hough‘s car and swiped $100,000 worth of jewelry given to her by boyfriend Ryan Seacrest.

According to TMZ, Hough stopped by Hollywood on Friday night to visit a friend in an area apartment complex and left her fancy little Mercedes in the lot. When she returned to her car, thieves had ransacked it and made off with a sparkly present worth a hefty hunk of change.

Sure, Seacrest’s got his hand in so many pots that he’s probably already made enough money to replace the missing pieces three times over. However, his dancing beauty girlfriend maybe needs to be a little more careful. Who leaves such expensive jewelry in her car? Plus, TMZ said there were no visible signs of forced entry. It’s entirely possible that she left her door unlocked.

Hough isn’t the only celebrity victim of thefts. Last year, an old friend stole thousands of dollars’ worth of jewelry belonging to famed skateboarder Ryan Sheckler. The OC‘s Rachel Bilson‘s home was robbed a few years ago while she was on vacation. She returned home to find she was lacking tons of her favorite dresses, couture pieces, vintage shoes, and even jewelry from her grandma.

Then, in 2008, Matthew McConaughey was robbed while on vacation in Nicaragua. The perps stole his BlackBerry and $2,000 in cash. According to sources, however, he never reported the crime. The creepiest, though, was when Kate Moss‘ home was broken into (while she was home!) so thieves could steal art right off her walls, including a piece from the famed street artist Banksy.

All the victims have enough money to easily replace the missing items, but that doesn’t make the situation OK. Plus, there’s nothing quite like the uneasy feeling that comes with knowing someone uninvited was in your home or car.

Get Julianne’s sultry look from the PCAs >>

We hope Hough isn’t too distraught! Luckily, her boyfriend seems like a pretty caring guy. He certainly won’t be mad at her over the missing pretties and will hopefully be supportive of her if she’s feeling a little emotional after the incident.