We’re a little drunk on Luke. 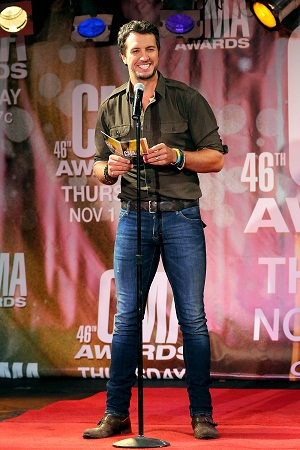 Country cutie Luke Bryan must be riding high right now. The son of a peanut farmer and fertilizer salesman, Luke probably never grew up expecting to find his way out of Leesburg, Georgia.

A collection of old country records and a guitar from his parents when he was 14 years old completely changed the Southern farmboy’s destiny. Now the 36-year-old is living the dream of many other current and former 14-year-olds: He’s finding success doing what he loves.

Luke’s new album, Spring Break… Here to Party, debuted at No. 1 on Billboard’s Top 200 this week after selling 150,000 copies. That’s impressive — especially when you consider he beat out a new album by the late great Jimi Hendrix to make it happen!

It becomes even more noteworthy when you take into account that Spring Break is, essentially, a compilation. According to Billboard, the last time a one-artist compilation graced the spot was in 2009 when the soundtrack for Michael Jackson’s This is It debuted there.

It might seem a little weird that the “compilation” is only the singer’s fourth album. But, this isn’t a “greatest hits” situation. Spring Break is a collection of some earlier spring break-themed EPs Bryan released between 2009 and 2012 , but never got tons of media attention.

We think it’s noteworthy, however, that even as separate EPs, they sold a combined 145,000 copies. In other words, plenty of people still found and bought the songs before they were released in a more commercial-friendly package.

Luke Bryan (and others) to perform at CMA Music Festival >>

Spring Break isn’t Luke’s first success. His previous album, 2011’s Tailgates & Tanlines, topped out at Billboard’s second position. The album contained some of his most popular songs, including “Country Girl (Shake it for me)” and “Drunk on You.” Luke first came to notice with his song, “Rain is a Good Thing,” which tapped into his redneckin’, farm boy past.

Need another reason to love Luke? We found this video of him pulling a fan on stage and trying to cover Old Crow Medicine Show’s “Wagon Wheel.” It’s pretty cute! (Though probably NSFW.)

Spring break is still a few more weeks away, but Luke’s Spring Break is in stores now. Enjoy!