In a puff of white smoke a new pope has been chosen — and of course, the stars reacted on Twitter. Here’s what they had to say. 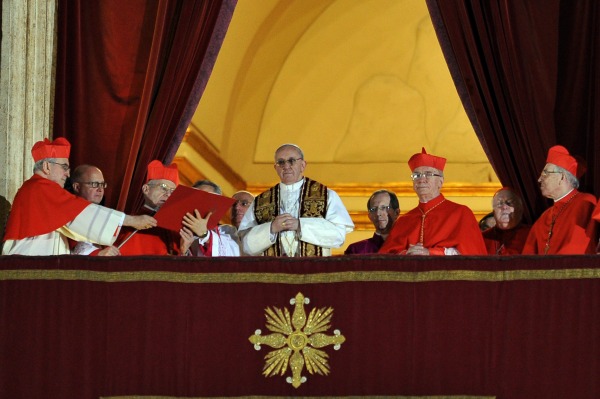 Seth Rogen ?@Sethrogen: “There’s also white smoke coming out of my office, but nobody seems that excited about it. #pope”

Albert Brooks @AlbertBrooks: “The new Pope came out on the balcony, saw his shadow, and realized there was six more centuries of scandals.”

The man behind the robes: Who is Pope Francis? >>

Joan Rivers ?@Joan_Rivers: “A new Pope has been chosen! I haven’t seen this many people transfixed by a puff of white smoke since the discovery of fire!”

Kathy Griffin @kathygriffin: “I don’t know about u but my conclave is exhausted. Did @CNN just say “this new pope needs no introduction” Is it Madonna?”

Downton Abbey’s Dowager Countess @theLadyGrantham: “White smoke rising from the #Vatican. Either a new pope has been elected, or Thomas and O’Brien are sharing a cigarette out back.”

Jim Gaffigan ?@JimGaffigan: “Any truth to the rumor I’m starting that the new pope will also replace @JoyBehar on The View. I’m not saying it’s me but I do have a Pope acceptance speech ready.”

Aziz Ansari ?@azizansari: “Feeling good about my chances to be new Pope. My agents said I should hear something today…”

Neil Patrick Harris ?@ActuallyNPH: “New Pope news soon! You might want to follow @TheTweetOfGod for all papal updates. He has an ‘in’.”

Maria Shriver @mariashriver: “Big moment for the church and for those of us who call ourselves Catholics. I hope the new pope comes with an open heart and open mind.”

Ellen DeGeneres @TheEllenShow: “The good thing about being sick is I don’t have to miss one minute of #PopeWatch2013. Back to the Chimney Cam.”

Chris Harrison @chrisbharrison: “When I told @SeanLowe09 & @clmgiudici I’m ordained I never thought the Vatican would respond so fast #Whitesmoke”