The action star is using his skills for good by attempting to get an entire country of young people into shape. 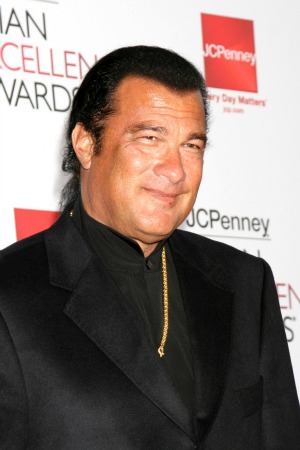 Dennis Rodman and Steven Seagal shouldn’t exactly be put in the same category for anything,  but both have been added to the list of minor celebrities who have visited world leaders in the last week (Rodman took a trip to North Korea and visited leader Kim Jong Un).

“I think it would be quite appropriate to recall the positive experience of past decades when the so-called GTO, Ready for Labour and Defence, was in use in our country,” Putin said, according to Alexei Anishchuk with Reuters.

The GTO training program was a health standards program that was introduced by Joseph Stalin in the 1930s.

“The revival of this system — in a new, modern format — could bring major benefits,” Putin added.

“Putin, who began a six-year term in May, has frequently appealed to nostalgia for the perceived order of the Soviet era,” said Anischchuk.

Putin believes that a student’s grade in the program should help or hurt the student’s college application. According to Anishchuk, Putin is making an attempt to increase his citizens’ life expectancies.

Steven Seagal factors into the program because his action films are very popular in Russia. According to Anishchuk, the actor appeared at the announcement as if he were Putin’s security guard for a seemingly choreographed bit. The president was taking photos with students when Seagal “rescued” him.

“Kids, remain calm, it’s a great honor to take pictures with the president of Russia,” the announcer said.

But other than that, it isn’t entirely clear why Seagal was there or what his role in the program will actually be. Seagal and Putin watched the kids practice martial arts but did not join them in the sport.

6 Must-have health and fitness apps for your iPhone 5 >>

Seagal has been staying busy, besides his apparent duties in Russia. He was working on the TV show True Justice, and he is currently the producer on the project (with a name only Seagal could love) Force of Execution. He will also be acting in another film, Gutshot Straight, due out this year.