Sean Lowe is waiting until the wedding to slip between the sheets with fiancée Catherine Giudici. Should she be worried about the wedding night? 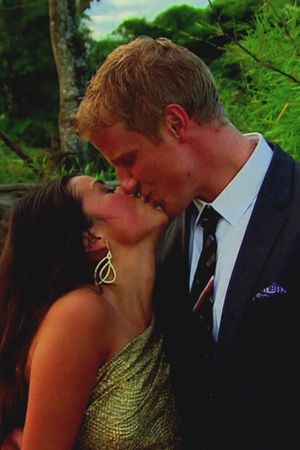 The Bachelor star Sean Lowe is sticking to his vow to stay celibate until marriage.

“From my perspective, I’ve lived life kind of selfishly for a long time,” the Christian and born-again virgin told People. “Now, I’m going to try to live it the way I know to be right.”

So, how does fiancée Catherine Giudici feel about it? She supports him!

“I honor him,” she added to the magazine.

We love a man with strong convictions — and the moral fortitude to stick with it.

It brings up a question, though: Does it matter if your guy has less sexual experience than you?

On one hand, it shouldn’t — you love each other, so the sex will progress over time until you’re on the same playing field. On the other? You might have to spend a lot of time coaching him and risk your own sexual pleasure to help him learn.

Taking charge in the bedroom is super hot, though — and maybe you’ll find that you like being in charge.

We’re going to go out on a limb and assume Sean and Catherine are excited to find out about their own sexual compatibility. The pair — set to marry in an ABC special — said they’re hoping to marry soon.

“We don’t have a date yet,” says Lowe. “But we’ve kicked around a lot of ideas, most of which are silly and fun. We just want it to be a big party.”

And as for what they’re really excited for? The “big party” in the bedroom afterward, presumably.

Does it matter if one person is more sexually experienced in a relationship? Sound off in the comments below!

Is it ever OK to kiss and tell?
Chris Brown says he “owns” Rihanna
Scott Disick insults Kourtney Kardashian over her weight