Khloé Kardashian really wants to be a mom — and now she is one! A dog mom, that is. 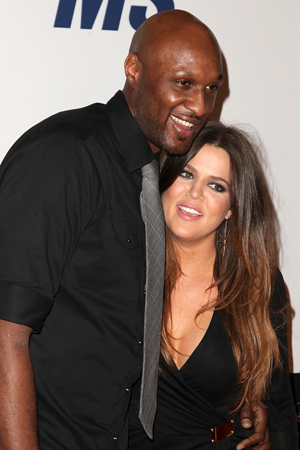 Khloé Kardashian and husband Lamar Odom just welcomed their own little bundle of joy — but it’s not a baby.

“Look what Lammy got us!” Kardashian wrote on Instagram, along with a photo of the puppy they named Bernard Hopkins. “Our baby boxer.”

The puppy is apparently named after the human middleweight boxer, whose nickname is “The Executioner.” Hopefully, the puppy won’t “execute” too many of the couple’s socks.

We’re happy that Kardashian has a little companion to love on, especially since she’s famously battled fertility problems during her marriage to the Los Angeles Clippers star. She’s reportedly documenting her treatments for the upcoming season of Keeping Up With the Kardashians.

“Khloé has always said she wants to have a baby when God meant for it to happen,” a source told RadarOnline. “She knows there are other women like her that are struggling to get pregnant.”

We think it’s a great idea for Khloé and Lamar to adopt a puppy, but we have to wonder: Is a puppy a good “trial run” for a baby? It’s an extremely personal choice, but a puppy can teach couples joint responsibility and communication — two vital skills couples need to master before becoming parents.

Then again, it’s probably not a good idea if you aren’t absolutely sure you’re in a committed relationship. Some rescues won’t even adopt out to unmarried couples unless they sign a document declaring what will happen to the dog if the couple splits.

It doesn’t sound like that’ll be a problem for the lovey-dovey reality couple.

“No matter how busy our schedules get, Lamar and I always make sure we find time for date nights,” Kardashian wrote recently on her blog.

Let’s just hope the dog doesn’t become an afterthought when they do eventually have children.

Are dogs a good way to “train” for babies? Sound off in the comments below!

Is it ever OK to kiss and tell?
Olivia Wilde wasn’t “good enough” for Jason Sudeikis
Chris Brown says he “owns” Rihanna