Kelsey Grammer’s windmill investment has turned out to be a big flop. Find out how much of the actor’s fortune was blown away when things didn’t go as planned! 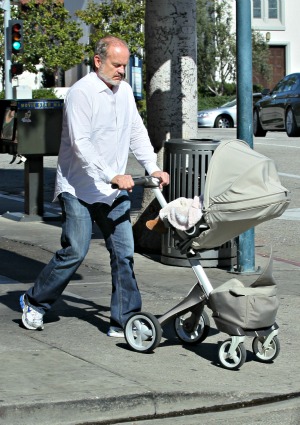 Kelsey Grammer’s windmill investment can be noted as his worst money move ever. The 58-year-old, seen here taking his 9-month-old daughter Faith for a stroll, has opened up to TMZ about the plan for alternative energy that went awry.

Kelsey Grammer was leaving Bouchon in Beverly Hills on Tuesday when cameras caught up to him. When asked about the most expensive mistake he’s ever made, he admitted to a mega 6-figure loss after investing in windmills.

“Big wind is doing OK… but it was a small wind investment and it cost me a lot of money,” the actor explained.

Unfortunately, the windmills didn’t turn out to be a windfall for his family. The father of five children, born during four separate marriages, said simply, “It’s just one of those things that’s just a straight loss.”

A lot of money still remains on the line for Kelsey Grammer, who is trying to sell off the $13.7 million home he and Camille Grammer purchased in 2007. It’s currently on the market for just under $15 million.

The pair have been trying to sell off their assets after reaching a divorce settlement back in December. Also up for grabs is their $6.9 million ski chalet in Colorado, and a $17.5 million mansion in Malibu.

Too pricey for your budget? Consider the former Boss star‘s ever-so-slightly more affordable Spanish-style estate in Beverly Hills that’s up for rent at $30,000 a month.

How does your most expensive mistake compare to Kelsey Grammer’s windmill whoopsie?