Lamar and Khloe’s puppy may just be the cutest thing ever! A newly adopted furball has been welcomed into the husband and wife’s happy, romance-filled home.

Related story Khloé Kardashian Is Fed Up With Mom Shamers: 'I'm Not Going To Let My Child Choke' 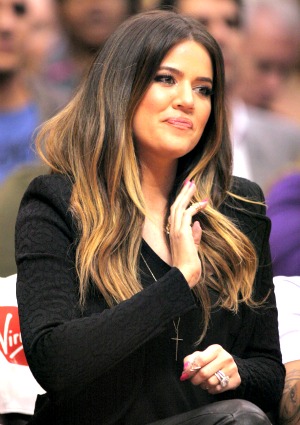 Khloe Kardashian Odom‘s adopted “baby” has the sweetest eyes, a speckled nose and a soft fur coat. A photo of the new addition to her family — a puppy — was shared on Instagram Tuesday, with a note explaining, “Look what Lammy got us! Our baby boxer.”

The dog, a romantic gesture from Lamar Odom, is only the latest sign that the couple’s relationship is flourishing. Khloe Kardashian, seen here courtside at her hubby’s basketball game March 6, is rumored to have packed on the PDA (public displays of affection) during a recent dinner out in Beverly Hills.

A source told Us Weekly the pair appeared “very much in love” and drank multiple bottles of wine with their meal.

They were “being very obvious and affectionate with one another, not caring that guests were watching,” the source added, noting the lovebirds took a number of canoodling photos of themselves.

In a blog post published Wednesday, Mrs. Odom wrote of their date night at Scarpetta:

“No matter how busy our schedules get, Lamar and I always make sure we find time for date nights just the two of us, so on Monday night we had dinner at Scarpetta in the Montage Hotel in Beverly Hills. The food was delicious and it was just so nice having a romantic evening out with my hubby.”

Khloe and Lamar are not only nurturing their relationship, but have added the most adorable puppy (named Bernard Hopkins or “B” for short, according to sister Kendall Jenner) to their family. Take that, pesky divorce rumors!

Do you feel as comfortable with PDA as Lamar and Khloe seem to?