Adam Sandler and Drew Barrymore are set to star in an untitled Frank Coraci film. 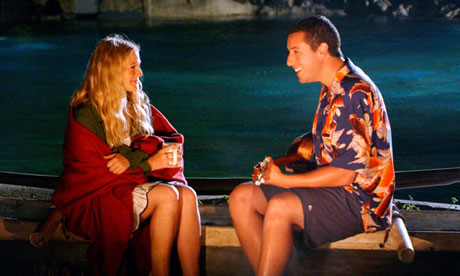 One of our favorite on-screen couples is set to work together once again!

Variety reports that Adam Sandler and Drew Barrymore are set to co-star in an as yet untitled romantic comedy.

The film centers on a couple who have a horrendous first date and are subsequently forced to spend time at a family resort with their children from previous relationships.

Frank Coraci is slated to direct the film, which was penned by Ivan Menchell and Clare Sera.

The two previously co-starred in the 1998 flick The Wedding Singer and the audience favorite 50 First Dates.

Sandler recently lent his voice to the animated hit Hotel Transylvania and will soon be seen in Grown-Ups 2 alongside Chris Rock and Kevin James. The actor is also rumored to be attached to the comedy Three Mississippi with Will Ferrell.

Barrymore’s upcoming collaboration with Sandler marks her first romantic comedy since she starred in Going the Distance in 2010.

It’s not surprising that the two are planning to work together yet again. The Wedding Singer took in $123 million worldwide while 50 First Dates took in over $196 million at the box office.

Both films currently rank among the highest-grossing Valentine’s Day releases of all time.

Sandler and Barrymore have tried their hand at drama but have fared best in projects that have a light-hearted tone.

Are you excited to see the two team up again?