Many pregnant couples come up with an endearing nickname for their little baby-in-utero: the worm, the muffin, little munchkin. Well, the royal couple is just like you! 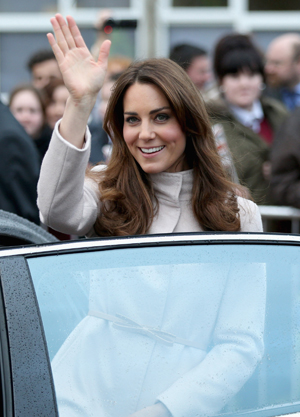 Prince William and Kate Middleton have a nickname for the royal baby bump, says Us Weekly, and it’s way cuter than whatever grand thing you might think they call the future royal ruler.

Our Little Grape is the nickname of choice, sources tell Us Weekly in a story previewed by Lainey Gossip.

Lainey Gossip also reveals that if the child-to-be is female, as rumor has it, the name currently under consideration (according to sources) is Elizabeth Diana Carole.

It’s kind of a traditional choice, both in the filial and the historical sense. Queen Elizabeth II is, of course, the current Queen of England at age 86, having ruled the British monarchy since being crowned in 1952. The current Elizabeth is herself one in a long and distinguished line of Elizabeths who have worn the royal crown.

Ever heard of the Elizabethan Era in English history? Yeah, that would be Queen Elizabeth I, 1558-1603, and the period during which Shakespeare wrote his plays and England established its first North American colony (Roanoke. Google it if you want to read weird stories about it).

Of course, if the royal babe does wind up female and named Elizabeth Diana Carole, she would also be named after her great-grandmother and both of her grandmothers. Carole is Kate’s mom, and Diana is, of course, Prince William’s mom Princess Diana, who famously died in a horrific car accident in 1997.

What do you think of the royal baby name, if the reports are correct?