Fresh out of North Korea, Dennis Rodman decides to make a trip to Vatican City for the papal conclave. If all goes his way, he could be riding in his very own pope-mobile by the end of the day. 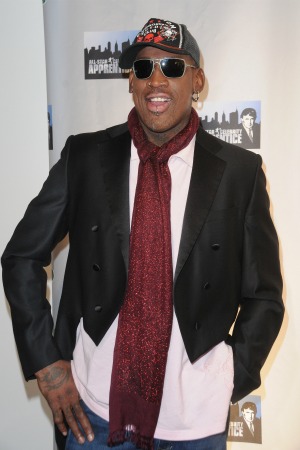 In case you ever thought Dennis Rodman can’t get any weirder, apparently you were wrong. We were all wrong. The former basketball player (and current All-Star Celebrity Apprentice contestant) visited Kim Jong Un in North Korea last week, and now he has a goal to meet the pope. Or at the very least ride around in his vehicle.

Rodman said he will be in Vatican City during the conclave to support Cardinal Peter Turkson of Ghana as the first black pope. But it may be a novel idea, since Rodman didn’t seem to actually do any research.

“Rodman didn’t seem too sure who he was supposed to be promoting when asked about it Wednesday,” said Fox News.

“’From Africa right?’ Rodman asked, wearing a hat and T-shirt promoting the Irish betting firm that organized his trip.”

The former Mr. Carmen Electra said he would like to visit the new black pope (if elected, of course) and would like to meet him in Africa to begin a journey of “self-styled” world peace.

Rodman’s “style” he is speaking of apparently starts with the blazer he wore his first day in Rome, which was covered in bright flowers, worthy of any Scooby Doo movie. He also spoke of showing up in his own pope-mobile, but it looks like that may not happen (depending on how long it takes to find a pope).

“Even Rodman’s plans to enter St. Peter’s Square in a custom-built ‘pope-mobile’ were uncertain Wednesday,” said Fox News. “The vehicle had been delayed by snow in northern Italy.”

According to USA Today, it may be very possible that Rodman would become the only person to ever meet with the leader of North Korea and pope in the same month. He just returned from a “mission” to North Korea to meet with Kim Jong Un.

“I don’t condone what he does,” Rodman told KXJB in Fargo, North Dakota, before the trip, “but he’s my friend.”

Dennis Rodman is so broke he might go to jail >>

There is no word if Kim Jong Un might show up for the papal conclave.