Lady Gaga is rollin’ with her homies (in style).

After canceling her tour due to a severe hip 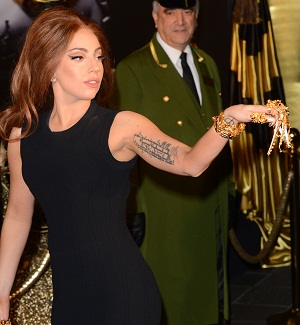 problem, Lady Gaga was forced to have surgery and then spend time in a rehabilitation program.

Now, MTV and the Daily Beast are reporting that she’s got a brand new set for blingin’ wheels to help her get around and ease the pain. OK, fine. The wheelchair is for a photo shoot. But we’re still hoping for at least one ridiculous night on the town in her custom ride.

According to the Daily Beast, Mother Monster’s stylist contacted 30-year-old Ken Borochov to create the work of transport. Borochov, who typically sticks to designing jewelry, launched his Mordekai label two years ago has gotten previous props from Kanye West and Nicki Minaj. He won’t tell how much he charged Lady Gaga for the chair, but the gold alone is reportedly worth $2,600.

Mother Monster thanks her supportive fans after her surgery >>

Just how much gold is on the puppy? According to Borochov, the wheelchair is plated in 1.5 ounces of gold. While he designed the special seat, he told the Daily Beast that he had plenty of hands to help create the final product.

“It was made all over the United States, my assistant had to run around everywhere,” he said. “I make all of my things here in the U.S.”

The chair was plated at a car factory in Dallas. Meanwhile, Borochov said his goal was for the chair to look like a throne. Mission accomplished.

Admittedly, neither we nor Borochov are sure if Lady G will actually use the wheelchair to get around. It’s for a Terry Richardson photo shoot. Still, the chair is so spectacular; we hope it finds a way into actual use.