This Friday marks the premiere of The Incredible Burt Wonderstone, the latest installment in what is fast becoming an impressive list of Steve Carell classics. We heart Steve Carell, so in honor of his latest comedic achievement, we humbly submit just a few reasons why… 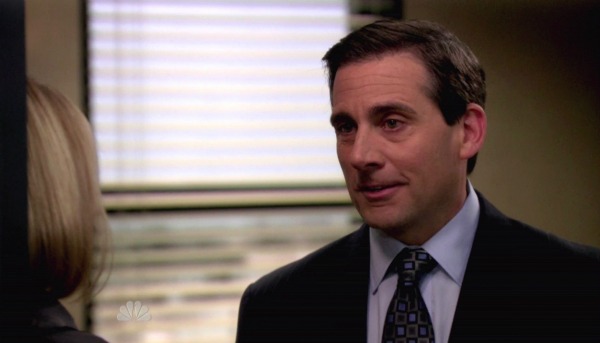 Obvious though it may be, in The Office Steve Carell will be immortalized as Michael Scott, that obnoxious little kid on the playground who grew up and somehow became your boss. Ever the little brat who is desperately trying to fit in and make friends, shouting, “Meeting in the boardroom in 20 minutes” every time something doesn’t go his way, Steve’s Michael Scott provided us with countless toe-curling awkward, politically incorrect moments. The most hilarious and disturbing thing about Michael Scott is that each and every one of us has had a boss or currently has a boss like that.

I don’t know who’s the brilliant casting agent who decided to team up Tina Fey and Steve Carell, but if they were standing before me right now, I would kiss their feet and buy them ice cream. All day. With the birth of Date Night, movie watchers were given another staple in their DVD library, under the subcategory, “Movies I can watch 100 times and still laugh my head off because I was laughing so hard the last time I watched this movie, I missed that part!” There are so many favorite (and recyclable — if you’re into that sort of thing) quotes from Date Night, but one of our all-time favorites has to be, “That’s amazing Jeremy, but I think I’m going to go home now and fart into a shoebox.”

Anchorman, The Legend of Ron Burgundy

Before Carell was Michael Scott, before he was Evan Almighty, before he showed he could be serious and funny in Dan in Real Life, Steve gave us Brick. Once again, Carell nails office humor with his portrayal of Brick, the staff idiot. And when you consider the other guys on this staff, that’s really saying something. Carell’s comedic subtleties are scene-stealers. “I love lamp. I love Steve Carell.”

Harrison Ford to star in Anchorman 2: The Legend Continues >>

(Note: Some of the terminology used by Brick may be offensive to some. It will make most people laugh themselves sick.)

As the gay uncle Frank in Little Miss Sunshine, Steve Carell flaunts the breadth of his talent. The guy really can do anything. Remember that DVD collection of classics we talked about earlier? Award winning Little Miss Sunshine falls under the subcategory, “Deeply disturbing and morbidly hilarious.” Uncle Frank tried to off himself after breaking up with his lover, which in one of the early scenes, becomes this dysfunctional family’s worst-kept secret. After road-tripping with his family, Frank goes from being on the brink of suicide to finding a home and perspective in the most unlikely of places: A broken down VW bus with a motley crew of highly irregular individuals. If you’ve not yet seen this masterpiece, we have only two things to say to you: 1. Whaaaaaaaaaa? and 2. Rent it this weekend.

What is your favorite Steve Carell movie or TV show? Share your opinion below!