The famous television judge is in hot water over $500k of French china she reportedly snagged from her producer going through a divorce. The only problem? One side said she illegally obtained the goods. 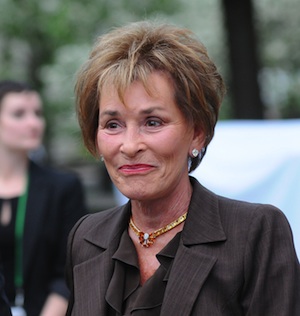 Judge Judy is being sued over $500k worth of fine china; the attorney making the complaint says Judge Judy knew better but didn’t care.

Randy Douthit is the executive producer for Judge Judy and, according to TMZ, was going through a difficult divorce when he sold several items by high end tableware and flatware manufacturer Christofle.

The lawyer for the ex-wife, Patric Douthit, claims she never gave her permission for Randy to sell the goods and under California law both parties must consent to the sale of any community property goods. Perry Wander, the attorney for Patric, says Judge Judy knew better and she’d better return the china as soon as possible.

“Well Judge Judy who used to be a family law judge, she purchased half a million dollars worth of Christofle china and silverware from her producer. Her producer was going through a divorce and [Judge Judge] purchased this china for $50,000 which is 1/10 of the actual fair market value of the property. And [Judge Judy] knew that in California, which is a community property state, sales of community property assets are voidable if both spouses don’t consent. And my client, the wife, did not consent to this sale and this lawsuit is seeking the return of this personal property which means a lot to my client.”

When asked by TMZ if Judge Judy would readily give up the pricey dishes, Wander was skeptical.

“My client made a written demand on Judge Judy to return the china and flatware and [Judge Judy] basically told her to go pound sand….[Judge Judy] knows she got a good deal and she’s going to try, I’m assume, to hold onto it.”

He concluded that Judge Judy should just give back the china to her producer. “I think it’s fraudulent the way she obtained it. I think it’s unlawful, it violates California community property laws. There’s also a court order for the husband to return the china but he can’t, in essence, return it, because Judge Judy has it.”

Judge Judy told TMZ that she thinks Patric Douthit’s lawsuit against her is ridiculous. “I have not seen any complaint by the former Mrs. Douthit, however, I don’t owe this lady a cent. And if this 50-year-old woman would spend her time more productively at trying to find a job, instead of abusing the judicial system with frivolous lawsuits, we would all be a lot better off.”