Rebel Wilson and Channing Tatum promote the 2013 MTV Movie Awards in a new clip that involves a high speed chase and some washboard abs. 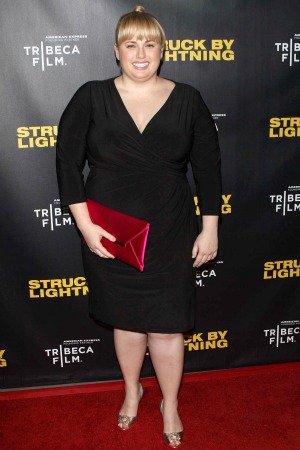 MTV is gearing up for the MTV Movie Awards which are scheduled to take place a little over a month from now. In anticipation of the annual show, the network has released a new promo that features this year’s host Rebel Wilson taking a ride with 2012’s Sexiest Man Alive, Channing Tatum.

It’s not lost on anyone that Tatum is a good looking guy with washboard abs, so Wilson takes one for the team and decides to sit on the handsome actor’s lap. Of course, this is all happening while the two are involved in a high speed chase involving rocket launchers and guns.

She climbs aboard the dad-to-be while he is driving and gunshots are going off around their SUV. In order to get a good angle, Wilson decides she needs the support of the sexy actor.

Tatum asks quizzically, “What are you doing?”

She certainly does get a better angle. An angle that most women would envy.

When the chase starts to go south, the awards show host makes the best suggestion of all. Wilson says, “They’re gaining on us. Take your shirt off.”

For movie fans with sharp eyes, take a look at the presidential seal in the backseat of the vehicle. It is a subtle promotion for Tatum’s upcoming film White House Down also starring Jamie Foxx and Maggie Gyllenhaal.

The actor plays a Secret Service agent who has to rescue the president after a paramilitary group holds the White House hostage. The film will be released on June 28.

The MTV Movie Awards will air live on the MTV network on Sunday, April 14.