Us Magazine has released a special issue dedicated to The Host. 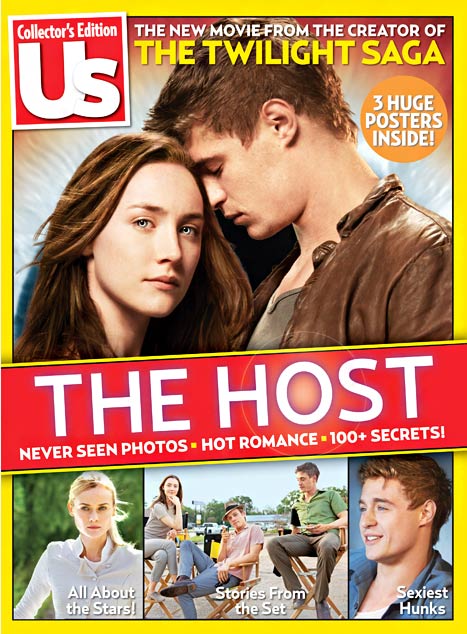 The premiere of The Host is still weeks away but those eagerly anticipating the film’s arrival will find an early treat currently on newsstands.

Us Magazine has released a special collector’s edition issue dedicated to the forthcoming romance that features an extensive guide to the film and irresistible posters. The cover story also promises “stories from the set” and “100+ secrets.”

Set during a time in which humans have been conquerred by aliens, Melanie (Saoirse Ronan) manages to stop an extraterrestrial force named Wanderer from overtaking her mind. While Melanie is in love with a human named Jared (Max Irons), Wanderer falls for Ian (Jake Abel).

William Hurt and Diane Kruger also star in the flick.

The Host is based on the bestselling 2008 novel by Stephenie Meyer. The book is the Twilight author’s first adult work.

The men of The Host vs. Twilight smackdown>>

It remains to be seen whether or not the screen adaptation of the science fiction romance will be a hit like Twilight or the recently released Warm Bodies.

It’s also possible that the film will suffer the same fate as last month’s Beautiful Creatures, which had a surprisingly disappointing debut at the box office.

Exclusive clip from The Host>>

The film was directed by Andrew Niccol, who helmed uniquely crafted sci-fi flicks like Gattaca and In Time. This could ensure that The Host doesn’t just lure young adult audiences but a wider range of filmgoers as well.

The Host is set to hit theaters on March 29.