Gerard Butler finally admits that he hooked up with Brandi Glanville — and made her cry. This really isn’t OK. 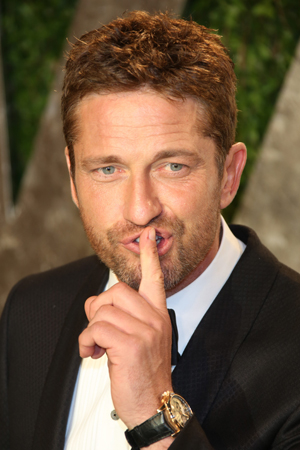 Talk about the ultimate diss.

Gerard Butler appeared on Howard Stern’s Sirius XM radio show on Monday and finally admitted that the rumor is true: He did hook up with Real Housewives of Beverly Hills star Brandi Glanville in a “one-afternooner.”

But he didn’t even know her name.

Despite having fun, he didn’t want anyone to know about it. The Olympus Has Fallen star added that he called the reality star to apologize for not remembering her name.

“I said one, ‘I’m not very happy you did that because there are certain things you keep a little private. And two, ‘I’m sorry I said I didn’t know who you were!'”

But, it’s OK that Butler talks about it now? Not cool, dude — not cool at all.

It brings up a bigger question: Is it ever OK to talk about a hookup openly? Sex is a pretty intimate thing, and not everyone is comfortable putting their private business out there for the public.

Plus, it’s pretty cruel for him to make a joke out of not remembering her name. She obviously read into it a little more than he did.

A good rule of thumb: Stay mum on it unless both sides agree it’s OK to talk about. We know, we know—it doesn’t always work like that. But at least try to be civil.

We hope Glanville finds a good guy soon, especially with all the drama she’s endured (and sometimes egged on) with ex-husband Eddie Cibrian and his new wife, LeAnn Rimes.

And no, we don’t think there will be another afternoon between Glanville and Butler. He’s found a new girlfriend, Romanian model Madalina Ghenea.