Karen has to choose between what she loves and what will make her a star, while Ivy runs into trouble working with funnyman Terry.

Related story Katharine McPhee Gets Candid About How Her Newborn, Rennie, Gave Her Body Confidence 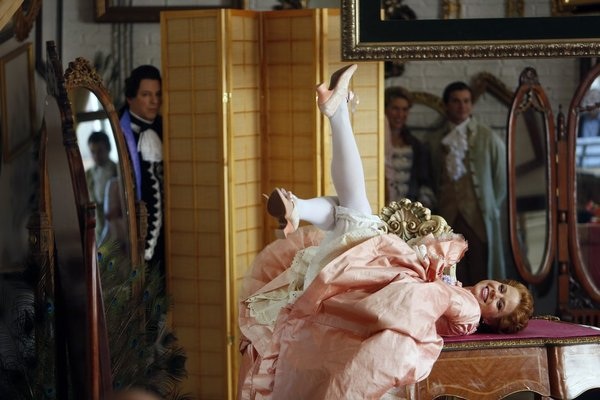 It looks like Karen’s (Katharine McPhee) plan to become Broadway’s sweetheart hits a snag this week on Smash. She’ll run into trouble as she’s forced to choose between a show that will advance her career and the one she loves (that also happens to be the show of the guy she’s completely crushing on).

Ivy (Megan Hilty) also faces unexpected trouble working with comedy star Terry (played by Will & Grace‘s Sean P. Hayes) on Dangerous Liaisons. We’ve already seen how difficult Terry can be, but it looks like things get a little worse when he’s off his meds and sober. Now, he pays a lot more attention — maybe too much attention. He notices how brilliantly funny Ivy’s performance is and then tells her she’s not allowed to be funnier than he is, so she needs to dial it back. Looks like we found the real diva on this show.

Jerry and Eileen’s (Angelica Houston) relationship also takes a turn for the worse, while “Hit List” performs at the Fringe Festival. And, of course, that doesn’t go smoothly either.

Smash recap: The read-through that will change everything >>

No word yet if there will be any new developments between Karen and Jimmy, but we’re sure hoping so! We’ll just have to watch and see all the drama (and great music) that ensues tonight on NBC.