Celebrity mom Jada Pinkett Smith has some stern words for the peeps who love to hate young stars: You’re jealous and you need to knock it off. 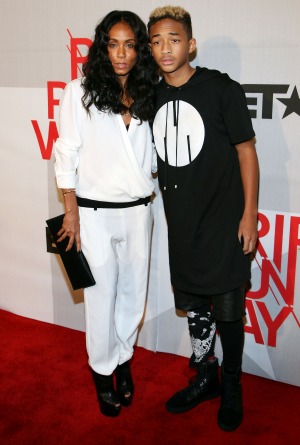 Jada Pinkett Smith has had enough of the bashing of young celebs, and now she’s speaking out. The singer/actress — who just happens to be the mother of Jaden Smith, who just happens to be Justin Bieber’s BFF and opening act right now — told the haters where to go in a long, heartfelt post on her Facebook page.

Smith appeared to be defending specific celebs including Bieber, Taylor Swift, Rihanna and Quvenzhané Wallis in her rant.

“This last week, I had to really evaluate the communication in regard to our young artists in the media. I was trying to differentiate cyber-bullying from how we attack and ridicule our young stars through media and social networks. It is as if we have forgotten what it means to be young or even how to behave like good ol’ grown folk. Do we feel as though we can say and do what we please without demonstrating any responsibility simply because they are famous?”

“Is it okay to continually attack and criticize a famous 19 year old who is simply trying to build a life, exercise his talents while figuring out what manhood and fame is all about as he carries the weight of supporting his family as well as providing the paychecks to others who depend on him to work so they can feed their families as well? Does that render being called a c**t by an adult male photographer as you try to return to your hotel after leaving [the] hospital? Or what about our nine year old beautiful Oscar nominee who was referred to as a c**t as well? Or what about being a young woman in her early twenties, exploring the intracacies [sic] of love and power on the world stage? And should we shame a young woman for displaying a sense of innocence as she navigates through the murky waters of love, heartbreak, and fame?”

“Are these young people not allowed to be young, make mistakes, grow, and eventually transform a million times before our eyes? Are we asking them to defy the laws of nature because of who they are? Why can’t we congratulate them for the capacity to work through their challenges on a world stage and still deliver products that keep them on top. We all know how hard it is to keep our head above water, even in the privacy of our own homes let alone on the world stage.”

Looks like Smith just hit the haters with a truth brick. Boom. But will they listen?