The girls uncover more secrets as they search for Toby’s body and try to get Spencer out of Radley. 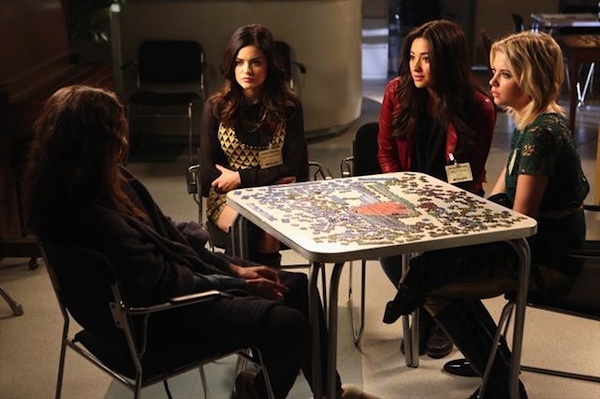 In tonight’s episode of Pretty Little Liars, a secret that’s been tormenting Spencer (Troian Bellisario) is revealed: Toby’s not dead!

Spencer refuses to help herself get out of Radley because she feels safe there and doesn’t want anyone else to hurt her. However, her friends have had just about enough of seeing their friend in such a creepy institution. So, they come up with a plan to help get her out.

Aria (Lucy Hale), Hanna (Ashley Benson) and Emily (Shay Mitchell) are convinced that the body Spencer found in the woods isn’t Toby’s (despite those killer abs and the same tattoo). So they’re on a mission to prove it to her and break her out of Radley.

Emily decides that their best move is to take a picture of the body, which has been labeled John Doe. So, Hanna and Emily disguise themselves as candy stripers and venture into the hospital’s morgue in search of Toby’s body.

In addition, an exclusive clip reveals that Spencer’s mother knows a little something about what was going on with Ali right before she died. Veronica visits Spencer at Radley and tells her that secrets destroy people. In fact, she hasn’t seen anyone in such a state since Ali, and she died a few weeks later. What could Veronica know?

Also, Caleb’s dad, Jamie, is being accused of stealing a valuable item from the church! Oh man, like Caleb needs anything else to be ashamed of his family and himself about.

But of course, all this new information doesn’t come without a price. Whenever one secret is revealed another is created (or someone is murdered or another horrible thing happens). We’ll just have to watch and see how nasty it gets, tonight at 8/7c on ABC Family.