Lots of big news from Sean Lowe today: Not only did he choose his bride-to-be on The Bachelor finale, but he’s stepping up his reality game with a turn on Dancing with the Stars! 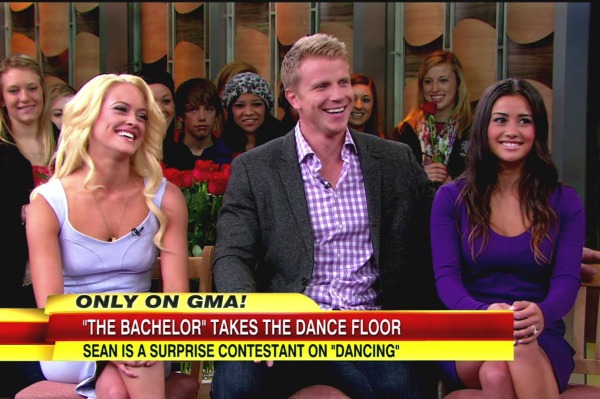 If you thought Sean Lowe would quietly ride off into the sunset with his new fiancée Catherine Giudici after last night’s finale of The Bachelor, you were sorely mistaken. Fan favorite Lowe has thrown himself on the reality train, and the next stop is Dancing with the Stars.

Good Morning America broke the casting news this morning, announcing that Lowe will join returning pro Petra Murgatroyd when the show returns for Season 16 on March 18.

“Hopefully, I won’t make a fool of myself on the dance floor,” Lowe said.

And of course he has the full support of his new fiancée Giudici.

“When they asked me, the first thing I did was call Catherine because I wanted to make sure she was on board and was fully supportive,” Lowe told People. “I didn’t want her to feel left out. I wanted her to know that she was going to be involved and she’s going to be a big part of this with me.”

His gal is super-stoked about this turn of events. “I used to take a lot of dance classes and I would like to revisit that, even if it’s with him in a living room,” Giudici said. “Because I want to see what he’s been practicing! It’s exciting.”

Lowe is the fourth Bachelor franchise star to hit the DWTS stage, following Jake Pavelka, Melissa Rycroft and Trista Stutter, and joins the cast already announced in February. And in case you’re afraid that the competition will be the last you’ll see of this guy, never fear: He and Giudici plan on having a huge televised wedding on ABC.

“We have everything in our relationship documented so far,” Giudici said on After the Final Rose. “It’s right for us!”