Troubled young mom Jenelle Evans checked out of rehab this week and likely just lost another opportunity to get her life back on track. 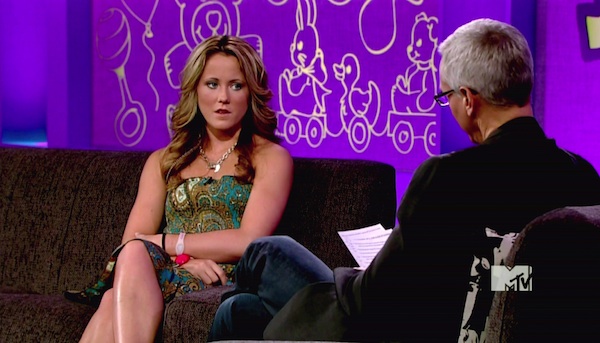 Despite a rumored drug problem, Jenelle Evans checked out of rehab earlier this week.

Sources for the celebrity gossip website Radar Online say Evans admitted herself into rehab on March 4, 2013 but checked herself out on March 10, 2013. “Jenelle just needed to spend time trying to figure things out,” said a source for the website.

“She wasn’t in rehab that long because she doesn’t think she really needs it. She’s ready to live her life like a normal person not on drugs or dealing with the crappy guys who were around her.”

The site says their source is referring to Evan’s estranged husband, Courtland Rogers. Jenelle married Rogers in December 2012 and less than a month later told her fans she was going to divorce Rogers. Earlier this year, Evans filed assault charges against Courtland and revealed she was pregnant with their second child.

In January she tweeted, “I am getting a divorce, ASAP. YOU F***ING LEAVE OUT OF TOWN AND I MIGHT BE HAVING A MISCARRIAGE?! F**K U, U F****ING PIECE OF S***. Later that month Jenelle Evans suffered a miscarriage.

Radar Online believes Jenelle Evans may have checked into rehab for heroin use, an allegation perpetuated by Courtland Rogers. Rogers told OK! magazine just a week ago that both he and Jenelle were recently using drugs.

“When we first got together we were both not doing too good on prescription drugs. We had problems,” said Courtland to the magazine. “But then the drugs got bad on her half so she started getting bad. Every morning, throwing up in the toilet, my mom having to clean up throw up, we were staying with my mom. Her never feeling good, never leaving the room, always in bed, always sleeping.”

Courtland said he believes Jenelle was using drugs during her pregnancy. “Well, she was pregnant while still using heroin and getting her scripts from her local doctor….” Rogers explained Evans prescriptions were for Percocet and Lorazepam — a potent painkiller and sleep aid.

Courtland has not commented on Jenelle Evan’s recent exit from rehab. Evans posted a picture of her and her son shortly after checking out of rehab with the caption, “Just where I wanted to be. Morning Sunshine !!!”