Our loud-mouthed little girl is all grown up and acting a little strange. We’re worried. 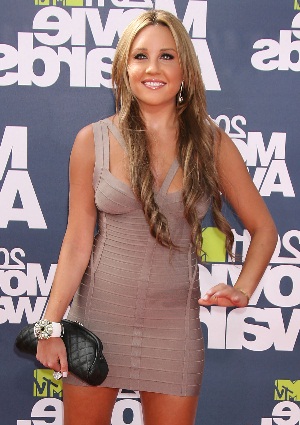 So far Amanda Bynes hasn’t quite gone over the celebrity point-of-no-return-to-normalcy. For that, we give her credit. However, it’s becoming increasingly apparent that she might be well on her way.

We love Amanda, but her actions have been a little disconcerting lately. In recent days, Bynes has played a little dress-up for Twitter and her feed has lit up with tweets about working out. The only break from that is the occasional derailment about lost love.

More on rumors about Amanda Bynes >>

Her photo shoots are a little reminiscent of that one from your college roommate who takes new bathroom-mirror selfies every day so everyone can see her version of a Pinterest outfit and show off her figure. Bynes’ last few photos have included pictures of her in various wigs, from long, luscious curls like Jessica Simpson to a short, cropped thing a la Chicago. And, yes, her cheek piercings are pretty noticeable in nearly all of them. It appears someone must like her new look(s), though. Her newest tweet is a little more hopeful on the romantic front and a great departure from her usual set.

“Love is when two people who have been apart for years want to be alone forever,” Bynes tweeted. Although we’re not 100 percent certain what she’s trying to say, we hope it’s a telltale sign of some (healthy) romance in her life.

Maybe her possible new beau can convince her to stop going to the gym so much. Among all the other strange behavior, she recently told Us Weekly about her desire to drop another 20 pounds, putting the 5-foot 8-inch former actress at 100 pounds even. Goodness.

She also recently decided to “retire” from acting in order to pursue fashion design, though no more seems to have come of that. And, while we hate to rehash it, there was that incident with the DUI and two hit-and-runs. (Not to mention the tweet where she asked the president to “fire” her arresting officer.)

Bynes says she didn’t do it >>

What’s going on here? There was a time in all our girlhoods when Bynes was kind of a big deal. Who didn’t dream of being Daphne Reynolds with her dapper dad in What a Girl Wants? And, OK, so Holly’s mistakes were often a little cheesy, but What I Like About You was a highly entertaining program. Most important, though: Amanda was the cute, funny, loud-mouthed little girl on Nickelodeon’s All That and The Amanda Show. That’s what started it all for her and we miss those days. Sure, at some point you have to grow up and learn to talk in an inside voice… but that shouldn’t have been too difficult.

We don’t know who this creature is that has taken over Bynes’ Twitter account, but we’re very concerned. Will the real Amanda Bynes please stand up?