Not only did The Following finally introduce us to the elusive Roderick, they simultaneously gave us some new eye candy. Wait, he’s a Southern gentleman and a serial killer? 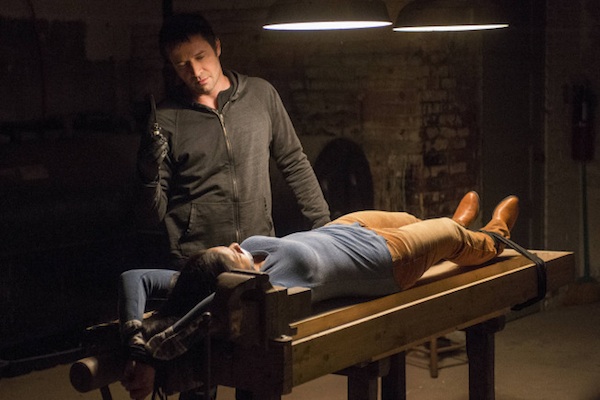 I generally don’t curse. In fact, I’m that girl that people are surprised to hear swear. But put me in front of an episode of The Following, and the words start flying. The twists and turns take me completely off-guard every episode. This week was no different.

Joe Carroll (James Purefoy) has escaped from prison and reunited with his son at a mansion in the country. Smart little Joey (Kyle Catlett) gives him the silent treatment, but that doesn’t damper Carroll’s mood enough to keep him from hosting the creepiest party of the year. The main event: A hoard of people who are desperate to please Carroll.

The guest of honor? Roderick.

That’s right. We finally meet the man behind all the phone calls. Turns out he’s young, definitely attractive, sheriff and, oh yeah, a serial killer.

The Following gave us a taste of Roderick’s past tonight. Roderick (Warren Kole) was Carroll’s first student in the ways of becoming a serial killer. He owes Carroll his life because Carroll took the fall for two killings Roderick was actually responsible for.

In the meantime, Ryan (Kevin Bacon) is scrambling to apprehend Carroll. Ryan interviews David, the one he shot in the last episode. Right after David tells Ryan the whole game is just about capitalizing on Ryan’s fears, David bites into his hand and starts seizing around the blood. (Cue the swearing.) He had some kind of drug capsule inserted under his skin and dies before help can even make it into the interrogation room.

Back to Carroll. Roderick’s been recruiting and has big plans for the group of killers. Carroll, on the other hand, isn’t interested in hearing about it until the group can find Claire — who Carroll insists he loves despite the sexual tension he and Emma share.

The new plan to get Claire back? Target an individual member of the FBI and hope that person will lead the following to her location.

Roderick chooses Weston (Shawn Ashmore) as the first target. He, Charlie and a handful of others, kidnap Weston and take him to an abandoned harbor. Roderick tries to interrogate Weston, but despite being forced to fight military-trained Charlie, Weston refuses to talk.

Weston reveals that he recognizes Roderick and the fighting intensifies with metal bars. Weston insists he doesn’t know where Claire is. Either way, Roderick has no intention of letting Weston live. The final round is fought with knives. Weston is stabbed. (Lots more swearing.)

Ryan arrives just in time with the rest of the team and shoots the following members down before they can land the killing slice to Weston. Roderick and a few others escape.

The Following gets a 2nd season >>

Finally, a win for the FBI. The following loses five members and doesn’t get any information on Claire. Plus, we find out that Weston really did know where Claire was hiding out and, even so close to death, didn’t tell the following.

But that’s just one battle. Back at the farmhouse, Roderick promises Carroll they will find Claire, which spells out more violence for future episodes.

Charlie apologizes to Carroll for letting him down again and hands him a knife. Charlie says his death is what he wants because he wants to matter in the grand scheme. Carroll whispers to him sincerely, “You will always matter,” before stabbing him in the stomach, ending his life. (This time, only mouth gaping.)

After Charlie’s death, Emma brings Carroll clean towels and helps him wipe off the blood. Though Carroll initially resists, claiming he loves his wife, he finally gives into Emma and sleeps with her.

If there’s one thing The Following teaches us, it’s that the good-looking ones will always break your heart. In the case of the show, they might stab it, too.