Steven Tyler is finally showing off his ridiculously expensive car. Just how expensive? Let’s just say it costs more than the GDP of some small countries. 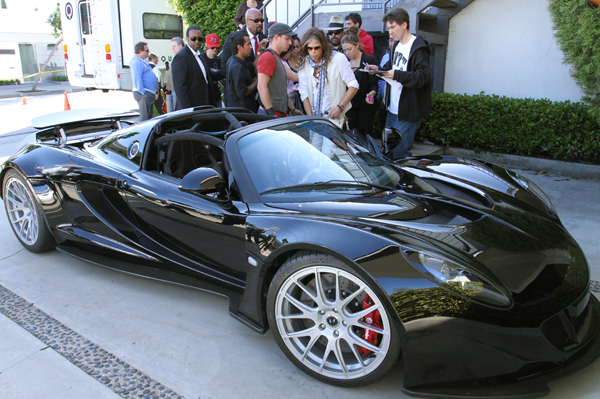 Question: Which celebrity would you expect to buy a custom car worth $1.1 million?

You probably assume the answer would be Chris Brown or Justin Bieber, but you’d be wrong. Actually, Steven Tyler is the one tooling around Los Angeles in his Hennessey Venom GT Spyder.

The Aerosmith singer showed up at the Stuart House benefit with bandmate Joe Perry, but all anyone wanted to talk about was the car.

And yes, it’s pretty unique — only five were made, according to Yahoo! Autos. The ride can hit 200 miles per hour in 16 seconds, making it the fastest car in the world.

“Steven came to us last year and asked if we could build his Venom GT as a roadster. We had to make a few structural changes to our integrated rollcage in order to be able to fit the removable top,” John Hennessey said in 2012. “This increased the weight of our vehicle by about 30 lbs to a curb weight of 2743 lbs (1244 kilograms). We decided to increase the Venom GTs power to 1244 bhp to maintain our 1 horsepower per 1 kilogram power to weight ratio.”

Steven Tyler says he would return to Idol if he could >>

Maybe some people are impressed by this, but we just think it’s a lot of cash to drop on a depreciating piece of equipment. Why not spend that cash on a new house? At least that’s an investment.

Then again, we’re not exactly car aficionados — especially not for ones that are nicknamed “the best way to die.”

Read on for more Steven Tyler