Kristin Cavallari is speaking with E! News and drops a major bombshell to Giuliana Rancic regarding the behind-the-scenes reality of The Hills. 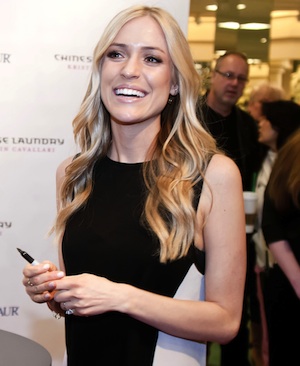 Kristin Cavallari was on MTV’s hit show The Hills from 2009 until 2010. Kristin rose to fame after her catty, boy-loving portrayal on MTV’s Laguna Beach was a hit with fans. Laguna Beach garnered high ratings for the network and made instant celebrities of its cast.

The Hills was a Laguna Beach spin-off and featured Lauren Conrad as she followed her heart in Los Angeles fashion. Cavallari remained pegged as a villainous force in Conrad’s life.

Fans may remember watching Kristin Cavallari on The Hills and one memorable episode that suggested Cavallari may have had a drug problem. Kristin talked with E! News about her time on The Hills and said the entire drug storyline was created by producers — and they bribed cast members to “confront” Cavallari on camera.

Giuliana Rancic asks Kristin about “the talk in the tabloids about drug use” and point-blank questions Cavallari: “Were you a drug user?” Kristin responds and explains the entire drug use story was fabricated during the 2010 Super Bowl held in Miami, Florida.

Kristin says the cast was filming and she believes producers approached some of the cast with a lucrative bribe: Ask Kristin about her partying lifestyle on camera and walk away with a luxury Hermés Birkin handbag.

Kristin Cavallari is not on good terms with The Hills cast >>

“One of the producers told the girls he would give them some gifts, specifically a Birkin bag, if they had talked about me doing drugs on camera. So the girls took the bait and the next thing I know we get home and everything and [the alleged drug use] is in one of the tabloids that I have this huge drug problem and I need to go to rehab.”

Cavallari went on, “The hardest part through all of that stuff was that I felt so used. I realized at that moment that I didn’t matter — none of us mattered — it was just all about ratings and what [producers] could do to get people talking about the show.”

“And it was just such a slap in my face because I really went along with everything they asked me to do and I was game for everything. And then, to have that done to me — I just felt it was taking it too far.”

Kristin Cavallari doesn’t say in the released interview clip how she learned producers offered to bribe the other cast members of The Hills but she does say the girls never received the Birkin bag.