Valerie Harper, who revealed last week she has terminal brain cancer, was decidedly upbeat when she sat down for interviews with TODAY and The Doctors. The actress, who admits “incurable” is a tough word to hear, says she intends to live each moment to its fullest. 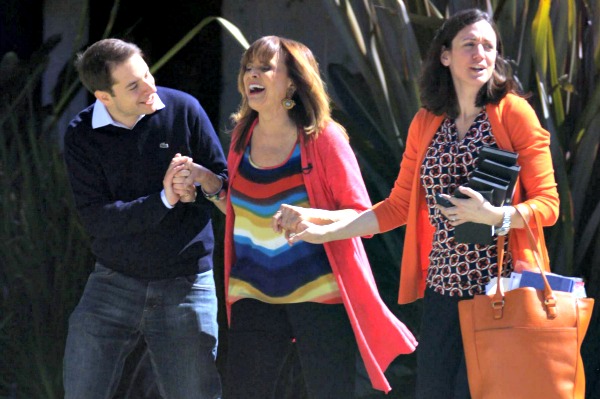 Valerie Harper is far from alone in facing death. Sure, the actress is facing terminal brain cancer while most of us are not, but as she pointed out, “None of us gets out alive.”

In a pair of recently taped interviews, the 73-year-old explained how she’s coping with her frightening diagnosis.

A look at celebrities who have survived cancer >>

Speaking to TODAY‘s Savannah Guthrie from her home, an upbeat Valerie Harper (pictured above laughing with the show’s producers) admitted that “‘incurable’ is a tough word” to hear. In fact, her husband of 26 years, Tony Cacciotti, “got hit like a ton of bricks” with the diagnosis news.

“I’m not dying until I do,” the Mary Tyler Moore Show actress insisted, adding she’s hopeful. “More than hopeful, Savannah. I have an intention to live each… moment fully.”

During a taping of The Doctors, Valerie Harper went on to share she has had some difficult moments, but doesn’t let them get out of hand. “I broke down. I absolutely sobbed. I let myself do it,” she explained. “Then I said, ‘Okay, you’ve been the drama queen. Now get over it and do the pasta.'”

Coming to terms with the fact that she may only have three months to live, Valerie Harper noted, “If you die, you’re not a failure. You’re just somebody who had cancer, and that’s the outcome.”

“I want all of us to be less afraid of death,” she added. “None of us gets out alive. Don’t go to the funeral before the day of the funeral.”

Check out the promo clip for Valerie Harper’s The Doctors appearance: