Olivia Wilde wasn’t so sure she could actually date someone like Jason Sudeikis, but not for the reason you might think. 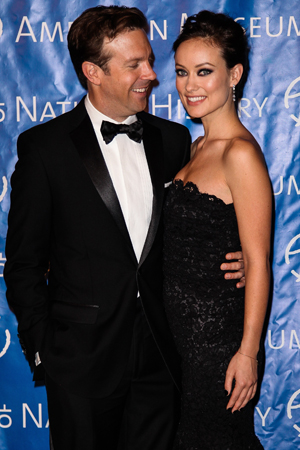 Olivia Wilde is arguably one of the most beautiful women in Hollywood, but even she questioned whether fiancé Jason Sudeikis was in her league.

“He was so cool, so funny — I was such a fan of his and had always liked his speed and his intelligence,” Wilde, 29, told Marie Claire in a new interview. “He’s a brilliant actor with a brain like lightening. I thought, ‘I’m not beautiful enough or his type.’ I couldn’t wait to sit down and hear him talk.”

Wilde was still reeling from her divorce when she met Sudeikis at the SNL season finale in 2011.

“I was just learning to be by myself,” she said of life after divorce. “We were both seeing people but were single. He seemed to really see me, see through the bullshit. He said very few words and couldn’t keep eye contact. He was so handsome, and he could dance.”

These days, the pair are planning their wedding — and future children.

“[I] can’t wait for children. I’m open-minded about how many, but three, which I love, is like a little party,” Wilde continued. “I am not trying to have kids now — there’s no strict plan for anything in my life. What happens, happens. [Jason’s] so good with kids… I’ve never before experienced looking at someone and thinking, ‘That’s who I want to raise a child with.'”

Well, we don’t think the conception part will be difficult, thanks to Wilde’s past revelation that their sex life is not unlike that of African distance runners.

“[We] have sex like Kenyan marathon runners,” she told Vulture.com in 2012. “[Men] are not allowed to be the only ones thinking with their genitals.”