Morrissey has landed in the hospital for the second time this year. The singer, who was scheduled to perform on Saturday, has postponed his San Francisco show while he battles double pneumonia. 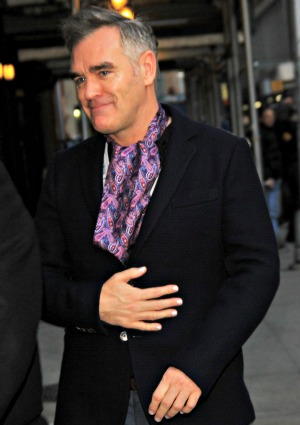 Morrissey has already seen more than his fair share of health problems and hospitals this year. While it was a bleeding ulcer that led to a string of shows being rescheduled in January, this time the singer’s battling pneumonia in both lungs.

A post put up Saturday on the official Morrissey Facebook page explains, “Due to Morrissey’s medical condition, tonight’s engagement at the Regency Ballroom in San Francisco will need to be rescheduled and will now take place on May 1. All tickets previously purchased for the Regency Ballroom show will be honored on the new date.”

A similar note was shared on the Morrissey webzine True To You, which has been known to share statements from The Smiths’ former frontman. The site notes he “remains on course to headline the Vive Latino festival in Mexico City on March 14,” and adds, “His show at Washington’s National Theater for April 5 has sold out within eight seconds.”

Oh, and one more little thing.

“Morrissey has apologized for the ‘extreme and silly’ venue security at Portland’s Arlene Schnitzer Theater during his show there (March 8).”

What’d the highly opinionated singer say about those on staff there to keep concertgoers safe? He’s quoted as commenting, “Place an obese McDonald’s fry-girl into a venue security uniform and she is suddenly Eva Braun.”

In a personally written message about his health woes, Morrissey shared previously, “The reports of my death have been greatly understated… The positive from all of this is that there are now no known ailments left for me to try.”

In bad health, but still in good humor, apparently.

Care to leave a well-wish for Morrissey as he battles double pneumonia?