Ike Barinholtz, who plays the oddball Morgan on The Mindy Project, chats with SheKnows about his eccentric character and his strange tattoo. 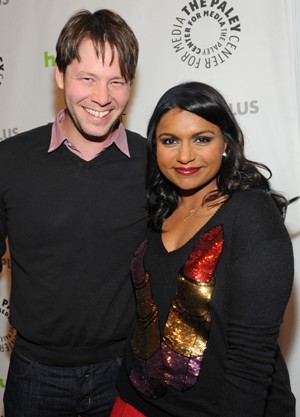 Though the tattoo on his stomach stating, “No more stealing cars,” looks pretty real, Ike Barinholtz of The Mindy Project assured us it’s just temporary.

“We just had to shoot a scene where I was shirtless,” Ike told SheKnows at Paleyfest 2013. “My hair just grew back and then they said we had to shoot a shirtless scene so I had to shave it again. [My wife] hates it.”

You don’t say! Ike’s character Morgan is a former car thief turned male nurse on the show who has turned his life around, and has the ink to prove it. And while Morgan is usually one of the main sources of laughter on the show, Ike tells us we may be seeing his serious side soon.

“We actually just shot a scene yesterday that was dramatic,” said Ike. “It was a very big moment between Morgan, Danny, Mindy and Jeremy in the office. It was the first time I walked away and I was like, ‘Oh god, I wasn’t funny in that.’”

It sounds like there’s plenty of laughter on the set usually, though.

“There are a lot of laughs,” said Ike. “You’re never not laughing. It’s kind of a dream job. [Mindy Kaling is] so funny. She has more energy than anyone I’ve ever met in my life. She’s just so fun to be with. You couldn’t pick a better person to spend 16 hours, five days a week with.”

Watch our interview with Ike

When he does have some free time, Ike is home with his wife, who he’s expecting his first child with soon.

“It’s going really good,” he said of the pregnancy. “I’m learning how to be a father. I’ve watched What to Expect When You’re Expecting four times now.”

Ike tells us that if he ever does get any real ink, it will be in honor of his little one.

“The show has to be on for at least five years before I get permanent ink,” he laughed. “It will be very small and it will probably have the name of my daughter on it, but it will still be a tattoo.”

Be sure to catch Ike Barinholtz and the rest of the cast on The Mindy Project, Tuesday nights on Fox.