Mumford and Sons release their third single from “Babel.” (Maybe the radio can play something besides “I Will Wait,” now?) 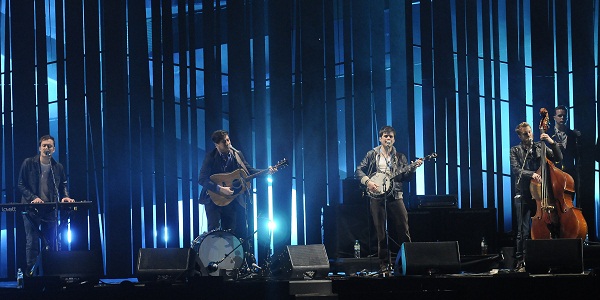 Mumford and Sons have released a new music video and we’re kind of in love… but, also, we have a headache.

The new video is for their song “Whispers in the Dark” off their second album, Babel, which released back in the fall. The song is far from new, though. YouTube has a smattering of videos of the band performing the song from back in mid-2010. That’s actually the case with all their singles from Babel. “Lover of the Light” began making its way onto their set lists about the same time as “Whispers,” and their first single originally appeared in the fall of 2010 under the slowed down, less radio-friendly guise of “Nothing is Written.” What’s the deal with that? Mumford and Sons have said multiple times that they like to test out their new songs during concerts to see how they hold up to the crowd. That was the case with their first album, Sigh No More, as well as the reason it took them another 3 or so years to finally release Babel. Their hesitation paid off, though, because that well-oiled machine of an album earned them plenty of Grammy nods back in January.

Music review: Mumford and Sons’ “I Will Wait” >>

The video for “Whispers” shows each of the four boys from Mumford and Sons as they embark on a journey to make it to their show. Marcus Mumford plays the cool cat in a leather jacket as he rolls around on a hot motorcycle. Pianist (and occasional drummer) Ben Lovett drives around on slightly less fancy wheels and then breaks free from the machinery and traffic to make a mad dash on foot. Meanwhile, bassist (and also occasional drummer) Ted seems to be wandering around a battleship and even runs into one of the band’s roadies all decked out in what appears to be a Navy uniform. Next thing you know, he’s acquired a golf cart and he and his upright bass are rolling toward the stage. Poor Winston (banjo, mostly, occasionally the dobro, but never the drums) seems to never leave the venue. We do, however, see him bounce from one entourage to another in an effort to go from dapper English gent to the tousled and rumpled redneck that graces Mumford & Sons’ stage every night.

It’s a pretty fun video! But since you’re following all four members simultaneously on a split screen, it’s sometimes a little overwhelming and we’re certain we’ve missed all kinds of clever details.

We’ve scoured the Twitters and Tumblrs of fans. We’ve read far too many barely literate dissections on SongMeanings.com. And still, we’re not 100 percent certain we can nail down a specific “meaning.” What we can tell you is that it is quite possibly definitely about one of two things: Cheating… or faith. Lyrics like the chorus “whispers in the dark, steal a kiss and you’ll break a heart” seem laced with the guilt that comes with cheating. Adding to that, lines like, “I lost my head and found the one that I love” perfectly describe that feeling you can get from one really good kiss with a person you shouldn’t have kissed. That said, Mumford and Sons is known for their often underlying looks at faith. So, it’s hard not to listen to sentiments like, “It’s not what I do that makes me” and “A brush with the devil can clear your mind” and not see a greater issue seeping into the song. Maybe it’s a song about both?

All in all, we love this song and the video. We’re desperately hoping the radio will cut back on “I Will Wait” and give “Whispers in the Dark” a chance to earn to rotations, too.