Mindy Kaling opens up about starting her own show, new love interests and kissing Chris Messina. 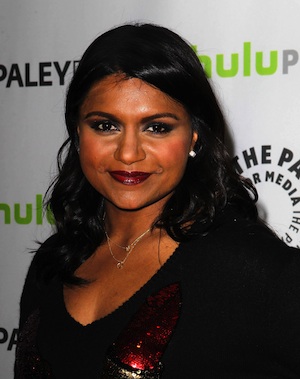 We love Mindy Kaling. She’s funny, intelligent and not afraid to embarrass herself every once in a while, so we at SheKnows were super-excited to get the chance to chat with her recently about The Mindy Project and Mindy’s love interests.

Mindy took a bold step after the success of The Office and branched out on her own to create The Mindy Project. “I should have been nervous,” she told SheKnows, “but I was just really excited. I had done The Office for eight years and I wanted to do something romantic.”

And there’s a lot of romance on her new show. A lot of laugh-out-loud failed romantic moments, actually, and you have to wonder how many of the stories stem from real-life experience. “I love romance and dating, but I’m a comedy writer nerd. So my character has been on more dates this season than I have in my life.”

WATCH OUR INTERVIEW WITH MINDY


The Mindy Project has also had great celebrity guest stars, like the super-funny Seth Rogen. “We loved having him on the show. He’s the nicest, warmest, movie star ever and I’d love to work with him again. He can come back any time he wanted.”

But with Seth’s character deployed in Afghanistan for 18 months, who would Mindy want to have play her love interest next? “Danny McBride is so amazing. I love Idris Elba and Jonah Hill would just be so much fun.”

What about the chemistry between Danny and Mindy? Is that going to go anywhere? “It’s hard to not want to kiss him. He’s a total babe, but it’s so early in the series. I don’t know. One day. Maybe I’ll just kiss Chris on camera and that’ll be something that happens.”

And we do hope that will be something that happens.

52 mins ago
by Tabby Kibugi