The eldest son of Michelle and Jim Bob Duggar has announced his wife is expecting their third child, due in June. 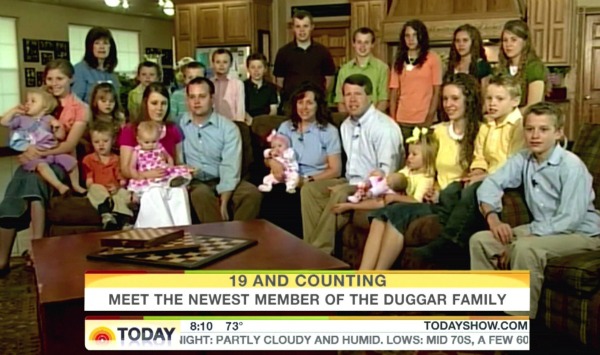 Michelle and Jim Bob Duggar’s son Josh and his wife Anna are well on their way to having just as many kids as their famous parents.

Josh, 25, and Anna, 24, have announced they are pregnant with their third child. Anna said she had taken a pregnancy test while the family was visiting Asia during filming of the show, but it had been negative.

“I thought for sure I was pregnant and so I was a little disappointed,” Anna Duggar told People. “But two weeks later, I found out I was pregnant.”

According to Entertainment Tonight, Jim Bob Duggar said he is excited to see the family expanding, and remembers back when they also only had three children — although their third child came much faster than expected.

“It is neat to see their family expanding,” he said. “I remember those days when Michelle and I went from one to three because we had Josh and then we had twins. It is a great start.”

Josh’s mom, Michelle, was also pregnant only two years ago, but experienced a miscarriage. Josh said that pregnancy gave him pause, and he is hoping for a happier outcome for his own child.

“With my mom’s last pregnancy there are questions and the fear of every expectant parent that this could end,” he told ET. “There is always some sort of risk with pregnancy and you never really know.”

Josh and Anna Duggar made their announcement Monday morning on The TODAY Show. Their two children are Mackynzie, 3, and Michael, 1. The baby is due on June 7.

Michelle and Jim Bob Duggar are staying steady at 19 kids, which includes nine girls and 10 boys. Amazingly enough, 19 Kids and Counting has been through 10 seasons since 2008. Season 11 will premiere April 2, 2013.