The Motley Crue lead singer went right from the stage to a stretcher Sunday night, racing to the hospital in severe pain and cutting short a Sydney show. 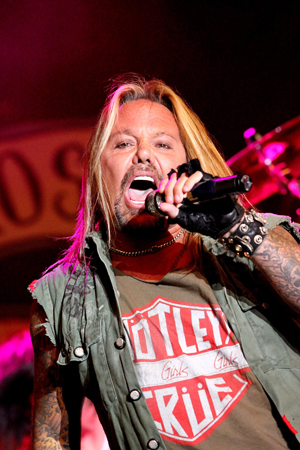 Kidney stones: They say they’re more painful than childbirth. Doubt it? Just ask Motley Crue singer Vince Neil, who suffered a stones attack so severe that he had to rush right from a show to the hospital for surgery.

Neil’s bandmate Nikki Sixx wrote on his Facebook page, “As many have heard we had to cut our set short by 4 songs last night due to Vince be in severe pain on stage.. He was doubled over on his dressing room floor 5 minutes till show time and was told by the promoter to not even play but Vince said he couldn’t do that to the fans.”

It was agonizing pain: ” I’ve seen Vinnie go onstage with broken bones, his voice completely blown out and torn ligaments but he never ever cancels… Just like an athlete you sometimes have to play through the pain but last night it became [too] excruciating,” Sixx wrote.

Guitarist Mick Mars later confirmed that Neil was suffering from kidney stones and apologized to fans on Twitter. “Sydney, my apologies for a short set this evening. Vince had an attack of kidney stones. He went straight from stage to the hospital,” Mars wrote.

Sixx wrote that he was in constant contact with Neil: “I was texting with Vince most of the night last night as he was just waiting for the doctor to come back with the test results. This morning we found out he had to be admitted into surgery to remove kidney stones. He Just got out 5 minutes ago and the doctors said everything went well in the operating room,” Sixx wrote on Facebook.

Motley Crue and KISS are co-headlining a tour; Sixx also posted a photo of himself and Paul Stanley of KISS. The tour is scheduled to continue through Australia with a show in Brisbane on Tuesday.

“Vince is a warrior who has played shows through a wide ranging list of injuries. If there is a way to safely perform, he always does,” band manager Allen Kovac told CNN. “In nearly 20 years of managing Mötley Crüe, I can’t recall a show the band has canceled.”

As well as being the lead singer of Motley Crue, Neil, 52, also has his own tequila label, a strip club in Vegas, and a line of restaurants, Dr. Feelgood’s Rock Bar and Grill.