It seems only Barbara Walters really knows what’s going on at The View. 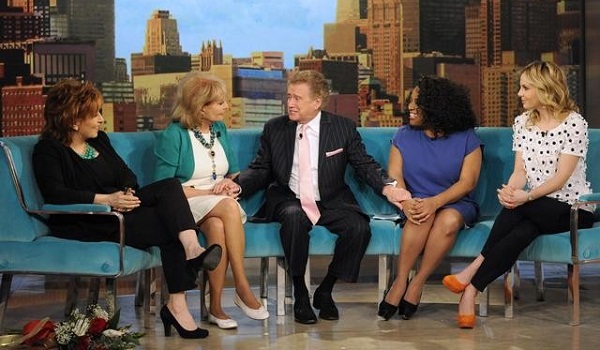 “We have no plans for Elisabeth to leave the show,” Barbara Walters announced a mere 10 minutes into the show. “But right now the only person who can’t leave the show is me.”

The rumors flew last week as The View said a possible goodbye to multiple members of the shows… or did they? Joy Behar had the only official announcement that she was leaving, though it wasn’t particularly surprising — she’s been with the show for 16 years. On the heels of that announcement came the rumor that Elisabeth Hasselbeck was also on her way out of the door. Since no official announcement was made, no official reason was given.

However, the people at Us Weekly believed she was axed due to The View‘s drop in viewership, which many believe is connected to Hasselbeck’s ultra-conservative viewpoints. There were even rumors that Barbara Walters herself might be on the way out.

As for the rumors about Elisabeth’s departure, she also told the audience and viewers, “The truth is we love Elisabeth, I like her personally and she’s just a wonderful person. But, beyond that we value and appreciate her point of view. It’s important to us because Elisabeth helps gives this show perspective and balance.”

The gossip never seemed all that legitimate. After all, they were also reporting that actress Brooke Shields was slated to take over for either Behar or Hasselbeck. Shields did an excellent job at the table while Walters was out sick with chicken pox. However, Shields is already pretty busy with her new role on Army Wives.

A pox upon her! Who gave Barbara Walters the chicken pox? >>

Luckily for all of us, Barbara Walters was there to clear things up for everyone!