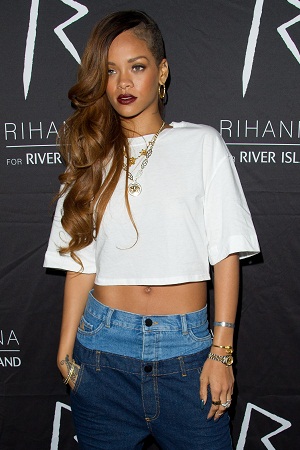 Rihanna’s Diamonds World Tour just started in Buffalo, New York, on Friday and it has already come to a halt. Barbadian pop/R&B singer Rihanna was forced to cancel her concert in Boston on Sunday night. The poor girl has contracted laryngitis!

Concert promoter Live Nation made the announcement that day, saying the concert will be rescheduled (just as soon as Rihanna’s health and schedule permit).

“Unfortunately, following her sold out concert on Friday, Rihanna has contracted laryngitis and per doctor’s instruction is unable to perform this evening,” Live Nation said in a statement released Sunday morning.

Meanwhile, Rihanna tweeted, “#BOSTON this is the hardest thing for me to deal with! I feel like we’ve been waiting on this day forever, and I’m hurt that I let you down I’m so embarrassed about this! Thank you for your prayers and well wishes!”

The 25-year-old “Stay” singer won’t be off stage for too long. Rihanna is expected to continue her tour, performing in Baltimore on Tuesday, March 12. Her tour runs all the way through July 28, when it wraps up Helsinki, Finland.

While this break may only last a day or two, Rihanna is still hoping for a longer vacation in the future. “I will probably have a kid,” the singer tells Elle UK in its April issue. “And I’m praying I can go on vacation for a good month. And I’ll have set some things up so I don’t have to tour for the rest of my life, even though I love touring. I want health and happiness in five years. I want to be healthy and happy.”

RiRi bloodied, shaken up after heckler throws bottle at her >>

Hopefully, she really does recover in time to peform in Baltimore and can reschedule her Boston date as soon as possible. We also hope she schedules that vacation soon. The best way to keep your immune system up to snuff to to get plenty of rest, Ri!