Was there anyone who didn’t watch Saturday Night Live last night? 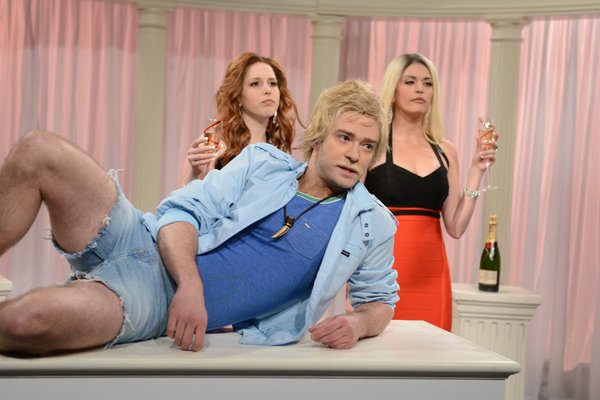 Justin Timberlake dropped by Saturday Night Live this weekend to host and perform on the show for the fifth time. Not only did he join the prestigious “five-timers” club, but he also garnered the show’s best ratings in more than a year. Yes, JT is that cool. (But it helps that the SNL franchise has been floundering during the last few years, consistently leaving viewers unimpressed.)

A long, long time ago in a decade far, far away, Timberlake was the end-all-be-all in terms of pop stars. The girls wanted him, and the boys wanted to be him. He took a hiatus from music to give film a go and to find his true love (who turned out to be none other than the lovely Jessica Biel). He’s back, though, and he’s brought more than just sexy with him. He’s pulled in a whole new generation (or genre, thanks to his collab with Jay-Z) of fans and unleashed a brand-new level of swag on the world. Also, his gorgeous blue eyes are everywhere. All of that most definitely played a part in Timberlake’s 5.9 rating this week.

Of course, Justin’s parade of special guests certainly didn’t deter viewers, either. As to be expected, Jay-Z was on hand to join Timberlake for their new single, “Suit and Tie.” Hova wasn’t the only big name in attendance, though. Andy Samberg dropped by for a few sketches. Plus, during Justin’s opening monologues we saw Steve Martin, Alec Baldwin, Tom Hanks, Candice Bergen, Martin Short and original cast members Chevy Chase and Dan Aykroyd. That’s a whole lot of star power and a little bit of strange. (Seriously, did anyone else find Bergen’s appearance a little weird?)

Hopefully SNL can keep up the awesomeness. Up ahead we’ve been promised Melissa McCarthy and the band Phoenix. Both of those sound like an awesome time!