Emma, Neal, David and Henry rush back to Storybrooke to save the life of Mr. Gold and try to stop Regina and Cora from using the dagger to steal his powers for their own. One will die, but who will it be? 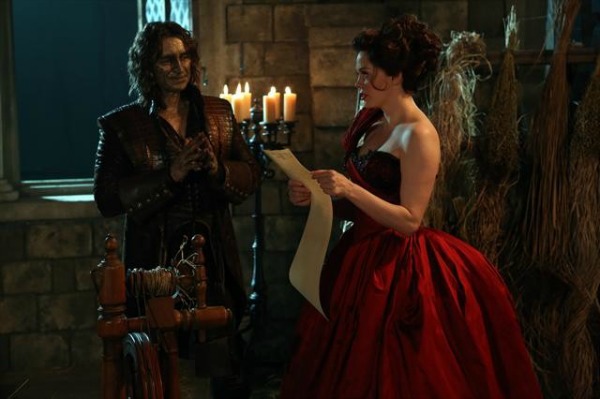 On this episode of Once Upon a Time, called “The Miller’s Daughter,” we find out what made Cora (Barbara Hershey) into the woman she is, starting with her life as a lowly peasant girl. Much like Rumplestiltskin (Robert Carlyle), it was after reached her lowest point that Cora decided to fight back.

Meanwhile, back in the current world, Emma (Jennifer Morrison), Neal (Michael Raymond-James), David (Josh Dallas) and Mary Margaret (Ginnifer Goodwin) get Gold back to his shop, where he says there is magic to cure him. He has them set up some warding spells, once of which is cast by Emma herself — after a little coaching from Gold. It turns out the magic Gold was speaking of is the very same magical candle that little Snow White was unable to use to save her own mother. Gold wants her to use it to save him, and since she’s been thinking long and hard about revenge, the idea isn’t as far-fetched as it might have been.

ABC planning a crazy Once Upon a Time spinoff? >>

In fairytale land, young Cora (played by Rose McGowan) sneaks into a ball, but she is caught by the king and now has to spin straw into gold to save her life and marry the prince. In comes Rumple (of course), who offers to give her a way to perform the feat, but soon the two fall in love and she finds she has a choice: Marry the prince for power or run off with Rumplestiltskin for love. She chooses power — but can only do so after ripping out her own heart and keeping it in a box.

It’s that heart that spells her end. Mary Margaret does decide to use the candle over Cora’s heart; then she tricks Regina into putting the organ back into her mother, where it kills her almost instantly. Mary Margaret tells Regina that giving the heart back will restore her mother’s love, and it does do just that — for about 30 seconds. Now Regina is more mad than ever at Mary Margaret, ensuring that the hatred she has for her former stepdaughter isn’t going away anytime soon.

Once Upon a Time: Emma in a bad-boy love triangle? >>

The smile on Henry’s face as he and his father sailed the ship together.

“You’re hoping I bleed to death now, aren’t you?”
“You’re Henry’s grandfather. We’re family now. I’m going to save you.”

Cora throwing the “enchanted box” on the floor because she didn’t like what it said about her.

The look on David’s face when Neal announced that he was Henry’s father.

“Is Cora trying to control you with the dagger?”
“You’d know if she was. Mostly because you’d be dead by now.”

“You think I care that a guy I dated a decade ago is engaged?” [Ha! Nice try Emma, but I’m not buying that — and I don’t think Neal is either.]

“Conjuring magic is not an intellectual endeavor. It’s emotion.”

Emma finding her power and conjuring a spell. Whoa!

Rumple coming up behind Cora to help her with the wheel and the way he seduced her into telling her story and finally spinning some gold. Who knew spinning gold could turn into foreplay?

Rumple’s little giggle when Cora said that brides had to be snow white.

Mary Margaret lighting that candle. Can’t say I thought she’d ever actually do it.

“If the choice is love or power, then even having a heart is a liability, don’t you think?”

Gold calling Belle from his deathbed and telling her who she was, a hero and a beautiful woman who loved an ugly man. [Must be dust in here. *wipes eyes*]

“Didn’t know you had that in you.”
“Oh, I’m full of love. I spent a lifetime looking for you, for the chance to say ‘I love you.'”

Bae grabbing his father’s hand. [Seriously, where is all this dust coming from? *wipes eyes again*]

The devastated look on Rumple’s face when Cora admitted that it was her heart in the box.

“You did this.” — The looks of horror and hatred that passed between Regina and Mary Margaret as they both realized what had just happened.

What did you think of this episode of Once Upon a Time? Did you suspect that Cora would be the one to die? What do you think will happen now that Regina has even more reason to hate Mary Margaret?