SheKnows talks with Connie Britton and series creator Callie Khouri about the big secret that Rayna is holding from Deacon: Should she tell Deacon that he has a child? 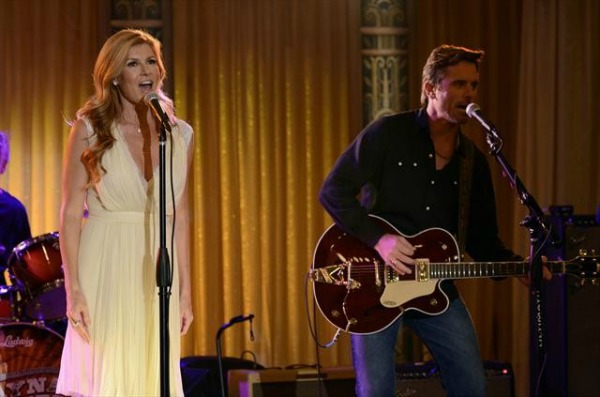 Rayna (Connie Britton) and Teddy have obviously come to terms with the fact that she conceived their first daughter with Deacon, but now a lot of fans are wondering if the truth will ever come out. Now that Teddy and Rayna are getting a divorce, it’s possible that Rayna and Deacon (Charles Esten) could end up together again. But if that happens, will it cause more harm than good to let him known that he’s Maddie’s father?

“I can’t imagine keeping a secret for that long.”

SheKnows spoke to Britton at this year’s PaleyFest, and this is what she had to say about what might happen if Rayna decided to tell Deacon:

“I don’t know, I don’t think it’s going to go well,” Britton said. “I was actually thinking about that in the shower this morning, which is weird because I don’t usually spend my random hours thinking about Rayna’s problems, but this morning I was like, ‘Why is she keeping this a secret from him for so long?’ I have to talk to Callie [Khouri, creator of Nashville] about that. I can’t imagine keeping a secret for that long that is that huge from somebody that you love so much.”

But if you think that cat should be let out of the bag soon, it looks like you’re going to hang on just a bit longer. TVLine reports that series creator Callie Khouri confirmed that Deacon truly “has no idea” about his child, and unfortunately she seems in no rush to let him in on the secret. “That’s a big deal. We’ll hold that,” Khouri said.

So while it doesn’t look like the truth is going to come out any time soon, chances are that it will have to come out at some point. That’s way too juicy of a secret to hang onto forever. But when it does come out, chances are it’s going to hurt a lot of people, so maybe it is best that Rayna keeps it under her hat for now.

Maybe back then, Teddy and Rayna realized that telling the truth would cause more harm than good, since Deacon was barely getting sober. Also, they were just entering their life of wedded bliss and probably wanted to put the whole thing behind them. Plus, Deacon’s been having a rough time of late and telling him now could push him over the edge. Not to mention the fact that Maddie and her sister are going to be traumatized by the news as well. That’s a whole lot of hurt to rain down on a lot of people. Is it worth it?

On the other hand, we all know what having a secret like that can do to people. Who’s to say that this couldn’t be one of many things that led to Rayna and Teddy’s split? And now that Deacon is on tour with their group, Rayna is going to have to face him every single day knowing what she knows. Also, what’s going to happen if the girls come out to visit? Plus, obviously Teddy loves Maddie and of course she will always be his daughter, but doesn’t Deacon have the right to know that he has a child?

Either way, it’s not going to be an easy choice. What do you think Rayna should do? Do you think she should finally tell Deacon the truth about his daughter or let sleeping dogs lie and not hurt everyone involved?