The View is going to look decidedly different next season! One day after Joy Behar announced she’s choosing to leave the daytime talk show, rumor has it Elisabeth Hasselbeck will also be leaving, but under a different set of circumstances. 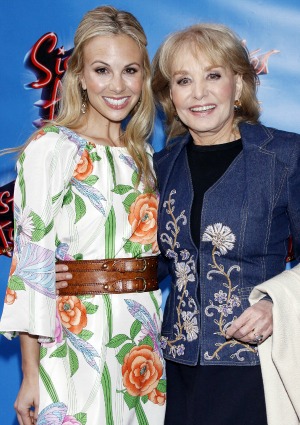 The View ladies are dropping like flies! Elisabeth Hasselbeck is reportedly getting axed from the show after a poll of viewers revealed her conservative opinions and politics made her unpopular.

On the tail of news that Joy Behar is choosing to leave The View after 16 seasons of wisecracks, reports are circulating that Elisabeth Hasselbeck won’t be returning either — but this departure doesn’t appear to be the blonde’s idea.

Joy Behar and Whoopi Goldberg walk off The View >>

Us Weekly reports an inside source has spilled the gossip beans, explaining that the conservative co-host is getting the boot after market research numbers proved she’s unpopular with those who count most — the audience.

“The viewers they polled all said she was too extreme and right wing,” the unnamed insider explained. “People did not watch the show because of Elisabeth. So they told her yesterday her contract would not be renewed.”

Bill Maher: Elisabeth Hasselbeck has a “bug up her a**” >>

However, a rep for the 35-year-old mother of three has a different take on the reports that her client has lost a seat at the show’s table. When reached for comment, the rep stated: “Elisabeth Hasselbeck is a valued member of The View and has a long-term contract.”

Hasselbeck, whose television career began in 2001 as a contestant on Survivor, joined daytime television’s talk platform in November of 2003 following Lisa Ling’s departure.

No word yet on if Whoopi Goldberg, Sherri Shepherd and 83-year-old Barbara Walters, who just recently returned to television after battling chicken pox, are expected back for Season 17, but it’s probably best not to assume anything at this point!

What’s your take on Elisabeth Hasselbeck reportedly being booted from The View?