Alec Baldwin and his wife, Hilaria Thomas, are thinking pink these days as they announced on Thursday that they are expecting a girl. 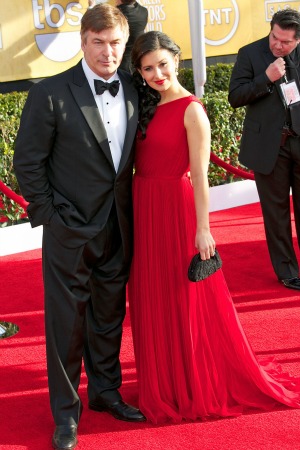 Are you keeping track of this week’s Hollywood baby news? Holly Madison had a girl and named her daughter Rainbow Aurora. Jessica Simpson accidentally announced to Jimmy Kimmel that she’s having a boy. Ali Landry confirmed that she is pregnant with her third child.

Now, Alec Baldwin joins that list: he’s having a girl.

Baldwin and his wife Hilaria Thomas broke the news in mid-February that they’re expecting their first child together. The former 30 Rock star has an 18-year-old daughter, Ireland, from his marriage to actress Kim Basinger.

Thomas is currently a lifestyle correspondent for Extra, so all of the baby news exclusives are coming from the entertainment show. Thomas is due late this summer as is Extra colleague Mario Lopez’s wife Courtney Mazza. The set will be filled with baby news and stories.

Baldwin is already used to being outnumbered by gender in his household. As Thomas told Extra, “Alec and I are overjoyed that we are going to be welcoming a little girl into our lives.” The couple joked that with two female dogs and a baby girl in the house, Alec will really be outnumbered.

The couple met in 2011 and married in late June 2012. While it seems that his marriage has encouraged the actor to get into shape, it has not toned down his temper or his strong opinions. He’s currently engaged in a war of words with actor Shia LaBeouf after the young actor dropped out of a Broadway show.

Let’s hope a new baby with late-night feedings and diaper changes will help Baldwin take it down a notch.