Star and stylist head out to flog the idea of a new clothing company working in denim. 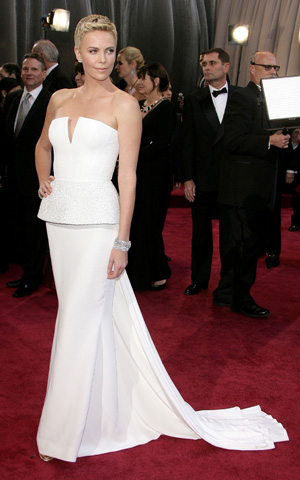 Charlize Theron looks great in her clothes, and now she wants to dress you up, too, the Hollywood Reporter writes.

Theron and her stylist, Leslie Fremar, who has styled clients like Scarlett Johansson and Reese Witherspoon, are “shopping the idea” for a Theron Jeans line to be sold in mass-market stores (think: malls).

Since stylist to the stars Rachel Zoe (Cameron Diaz, Anne Hathaway, Kate Hudson) cracked the pop-culture stratosphere a few years back, many celebrity stylists have made a name for themselves with their own lines.

Jeanne Yang collaborated with client Katie Holmes on the Holmes & Yang label; Yang is mostly known for dressing Hollywood men like Tom Cruise and Robert Downey Jr. Kate Young, stylist to stars like Natalie Portman and Michelle Williams, has a buzzed-about line at Target set to hit stores on April 14.

Zoe herself has her own fashion line, but it’s struggled over the last year, with Page Six reporting in August that the line wasn’t selling well at Neiman Marcus, Bloomingdale’s and Nordstrom. Saks Fifth Avenue stores dropped the line from its stores, as did British department store Selfridges.

So would a Fremar/Theron line sell? Depends on how good they make your butt look! If Theron’s skill in growing out a haircut is any indication, Theron Jeans would look swell.