Model Chrissy Teigen is known for her outspoken tweets, but her recent TwitPic might just get her banned from the site. 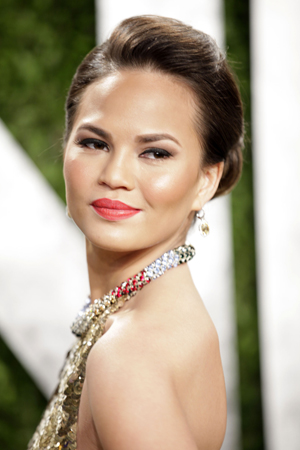 How much does it take to get model Chrissy Teigen naked? 200,000… Twitter followers, that is.

The Sports Illustrated model celebrated the milestone follower count by Instagramming a completely nude photo (NSFW) of a spray-tan session.

“If this doesn’t get me suspended I dunno what will,” she tweeted Thursday afternoon.

The photo was up for nearly 24 hours before getting yanked from Instagram. You can’t exactly see anything in the shot, save for a few shadows.

“It’s not a nipple it’s a shadow it’s not a bush it’s a shadow oh god I just blew it up on my computer I get what you’re saying oh no,” she later tweeted.

We are a bit concerned for her: Why is her mouth open while getting a spray tan? All those chemicals can’t taste good.

The nude shot was only part of Teigen’s busy Thursday. The fianceé of John Legend was one of thousands to stop by Taco Bell to test out the new Cool Ranch Doritos Locos Taco.

“I know what you’re thinking but this is unsponsored and unpaid. This taco is awesome,” she tweeted, along with a photo of her chowing down on the fast food item.

Read on for more celebrity nudity