Sofia Vergara, who has a 21-year-old son and a fiancé, is looking to add a new member to her family, the New York Post writes. 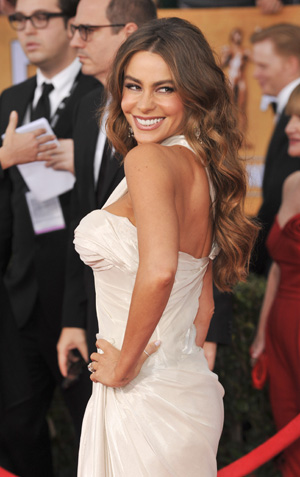 Sofia Vergara’s career is in high gear right now, with a major role on a very popular sitcom, a clothing line for Kmart and a number of film projects in the works.

She wants to ride that high, the New York Post reported today, with yet another new project: A baby with a surrogate.

She and fiancé Nick Loeb, Page Six reports, have asked a good friend of Vergara’s to carry the baby. “The child will be biologically Sofia and Nick’s baby, and she has selected a surrogate — who is a very close girlfriend — to carry the baby,” says the source who spoke to the Post.

“A procedure has taken place, and Sofia and Nick will find out in a few weeks if it was successful, if the surrogate is pregnant, and if they will become parents.”

Sofia Vergara is beating out Kim K. as the highest-paid TV actress >>

The Post also wrote that the Modern Family actress is “in talks” for movie roles including a comedy with Reese Witherspoon. Variety reported today that Vergara will co-star with Jason Statham in the remake of the 1976 Burt Reynolds actioner Heat, about a struggling gambler who goes into the security business. The legendary William Goldman (The Princess Bride, Good Will Hunting), who wrote the first Heat, is also penning the follow-up.

Vergara is also appearing with Danny Trejo in Machete Kills, director Robert Rodriguez’s upcoming sequel to Machete, which will be in theaters September 2013.

Vergara didn’t show up at the Oscars, which led some to speculate she had a serious illness. She tweeted she was just at home with the flu.