Do you remember LaTavia Roberson from the original Destiny’s Child? Well, LaTavia is pregnant and has just inked a new reality show. 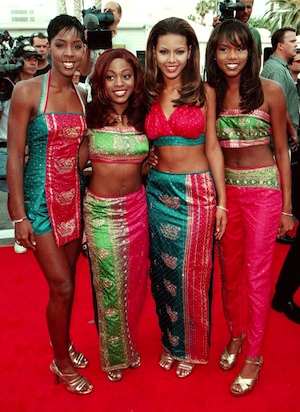 LaTavia Roberson is pregnant. The 31-year-old Roberson announced the baby news in a press release — really? —and is reportedly due on Beyoncé’s birthday.

LaTavia Roberson has spent some serious time in Atlanta, Georgia trying to get another recording career off the ground without much luck. Maybe Roberson hopes her new reality show can bring her some instant fame.

Roberson is three months pregnant and the baby’s father is Brandon Casey, an Atlanta, Georgia producer and member of the R&B group Jagged Edge. BET reports Roberson and Casey have not been in a committed relationship for several years.

Destiny’s Child back in the studio, set to make new music >>

Roberson’s rep said her reality show will be an emotional storytelling experience. “LaTavia’s pregnant, the ups and downs of her relationship with her child’s father and her past battles with molestation, alcoholism and jail time” are all themes that will be explored in Roberson’s reality show.

Watch LaTavia Roberson in the “Say My Name” video with Destiny’s Child.

Correction: While LaTavia Roberson sang on the Destiny’s Child single “Say My Name,” by the time the music video debuted in 2000 Roberson was no longer a member of the group.