Here’s a look at the five women and five men who will make up American Idol‘s Top 10. Listen up and pick a favorite (or two). 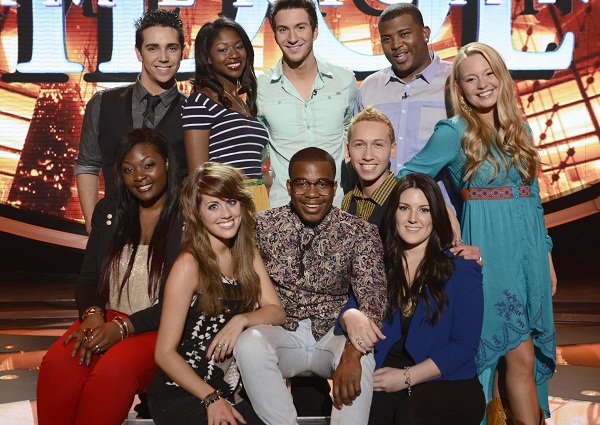 It’s been said before and we’ll say it again: He’s a male Taylor Swift. And by that we mean: He’s from Tennessee and a little “country,” he’s often a little off-key (but will probably sound good on a recording), he’s pretty and he mimics a lot of her on-stage gestures. Everything he does, though, is a little Broadway. We don’t hate it… but it could be toned down a little.

This South Carolinian is going to go far. She was cut last year in Vegas, yes. But she’s back and she’s bringing it. She’s covered Aretha, Alicia and Mary J… and she’s nailed them all. If she’s not Mariah Carey-ing every note, you can just feel that she’s holding back her diva. The girl has got a gift and we’re rooting for her. It’s about time Idol unleashed another Carrie or Kelly.

Burnell knows how to pick a song. Everyone is swooning over his India.Arie rendition, but we’re still obsessed with his cover of John Legend’s “This Time.” The kid’s got swag, too… literally. His stage presence isn’t awkward or overdone. Every move he makes is fluid and felt. We’re in love with that swagged-out Urkel and we’re not afraid to say it!

This is a little confusing. Her version of Lady Antebellum‘s “Just a Kiss” was a little weak and when she was up with Candice for “Girl on Fire,” she fell short compared to Candice. What we think the judges can’t let go of, though, is her very first audition. She walked in a sweet little country girl and belted out Keith’s “Where the Blacktop Ends” with so much style and power. It seems like they’re holding out hope for more of that.

Oh, Curtis. He’s got a voice. He’s a little too much of an entertainer from time to time, he could tone down hand gestures. But we can’t complain about his voice at all. Our favorite performance was when we went soaring back to the ’90s with Curtis for “I Believe I Can Fly.” He nailed it. And he looked amazing while rocking a little Marcus Mumford on top and Justin Bieber (but with better fitting pants) on the bottom. Love!

Angie is another contestant worth rooting for as she’s, quite possibly, the only girl who can hold her own against Candice Glover. The best part about Angie Miller is she didn’t show up to Idol as a shy girl needing to learn to blossom in front of the camera and the crowd. She’s already got that confidence in herself. Check out this video of her at home on her piano. It’s even better than her Idol performances.

Chicago’s Devin Velez has got soul that so many of the other Idol contestants seem to be lacking. Devin recently sang (and nailed) “The Power of One” by Israel Houghton, which seems rather fitting since he was raised in a single-parent home. It looks like being raised by a single mama may have its perks. He’s got the heart and attitude of an Idol winner, but we’d like to see a little more power. Not every can or should belt it out… but we’d like to see it from him a little more.

Kree is another Tennesseean in the midst of contestants. We’re pretty sure Nashville is trying to take over Idol and shut it down. If anyone has the power to do it, it’s Kree. Already a demo singer in the biz, Kree knows her stuff. She rarely holds back and knows just the right amount of herself to put into each note. Her cover of Patty Griffin’s “Up on the Mountain” is without a doubt our favorite of the season.

When it comes to the boys covering Urban, we liked Paul Jolley over Lazaro. That said, the cute Cuban ice cream boy killed it when he sang, “Feeling Good” by Michael Bublé. You’d never in a million years believe he had a speech impediment after hearing him sing. He’s got such a gift and there’s such an innocence to him that’s hard not to fall in love with him. In general, we’re not fans of stories that single out the performers… that usually ruins it for us. But not with Lazaro.

Amber’s got a little bit of Taylor Swift happening in her performances, too. She’s got a voice, but sometimes she tries a little too hard and ruins it. She’s also a little too cutesy sometimes. That said, we love her attitude and sassy that she puts in nearly every performance. We can see her going far based solely on her likability.

So… who are you rooting for?